You are here: Home / Children and Young Adult Books / The Orchard of Hope by Amy Neftzger 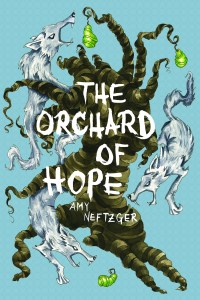 Hope is never gone, but it can be eaten alive.

A quest to save hope.

A kingdom under a spell.

A wizard in training.

A gargoyle with a sweet tooth.

The sequel to The Orphanage of Miracles is filled with engaging characters, magic, adventure, and unusual circumstance. It s a story that will both entertain and inspire the reader.

Kelsey, a strong-willed and high spirited young girl, embarks upon another adventurous quest – this time to save hope, which is being stolen from the orchard. While the kingdom is still under the spell of the evil sorcerer who distorts reality in order to gain control, the king begins training someone who he believes can ultimately defeat the sorcerer: a young boy named Nicholas. Revisit some of your favorite characters or meet them for the first time in this volume.

What Inspired You to Write Your Book?
As part of The Kingdom War series, I wanted to write a book about hope because most of us have felt as if our hope has been stolen at one time or another. Each book in this series deals with a different life issue and can be read without reading the entire series, although all the books connect in a larger story (not unlike the events in our own lives).

How Did You Come up With Your Characters?
I utilized many of the same characters from The Orphanage of Miracles because they represent different approaches to life and problem solving. Some are aggressive and head strong, while others are more reflective. The character of Moss is a mash-up of some eccentric college professors I’ve had in the past – many of these were brilliant in their fields but could not remember to tie their shoes in the morning.

Book Sample
Hope is never gone. But it can be eaten alive, and that’s exactly what was happening in the orchard. The king had told them about the problem before, but the problem wasn’t going away. In fact, the problem was getting bigger and becoming critical, and the king was certain that Kelsey could help. She was excited about the trip and looking forward to the journey to the orchard, wherever that might be and however long it would take.

It wasn’t as if Kelsey hadn’t enjoyed the past 18 months of training with the king’s army. The battle conditioning had been a wonderful experience for her, but now she was ready for action. Too much time spent in one place had made her restless. When the king first mentioned the quest, Kelsey had jumped up out of her seat with excitement.

“How do we save hope?” Kelsey asked with undisguised eagerness. After an awkward pause she sat down again and waited for an answer. Her fingers gripped the top of the thick walnut table where she was seated in the king’s study. Every wall in this room was covered with bookshelves from floor to ceiling, except for the places where there were windows, which also stretched the height of the room.

“That’s a question to which we do not yet have an answer. It’s a bit of a tricky situation,” the king said as he smiled. He was a tall figure with broad shoulders and flowing red hair. Although he ruled this land and was respected by his opponents in battle, Kelsey often thought about him as something of a father figure. His stature conveyed his strength, but his eyes and his smile hinted at the tenderness that Kelsey always saw in him. Of course, she had known him under different circumstances before she knew he was the king. In fact, he had been traveling in disguise and appeared to be a small mute orphan that Kelsey had attempted to help. Only later did she learn his true identity.

“Why don’t you simply fence the orchard?” asked Nicholas, who was a young boy about the same age as Kelsey. He sat upright in his chair, as if paying attention to a lesson.

“I wish the solution were that easy,” the king replied solemnly, “but we don’t fully understand the extent of the situation. Implanting obstacles, such as a fence, will solve the problem only if it’s a simple one. However, this issue is complicated.”

“So, someone has tried a fence already,” Nicholas concluded aloud. He was a rather smart boy who attended the Academy of Miracles, a place formerly known as the Orphanage of Miracles. Nicholas was being raised by his aunt and uncle, who were members of the king’s court, and because of this, Nicholas often spent his vacations from school at the castle.

“They’ve tried a number of potential solutions, but nothing has worked so far, and the obstacles only make the wolves more aggressive,” the king explained.

“Wolves?” Kelsey asked as she settled back into her chair. “Hope is being stolen by wolves?”

“It’s being eaten by wolves, but these aren’t the regular kind.”

“How are they different?” Kelsey asked.

“We’re not exactly sure. Our information is incomplete, but we know these are not typical wolves. For one thing, they can smell hope blossoming and they attack at the moment it becomes ripe.”

“Most animals have very keen senses of smell,” said Nicholas.

“This goes beyond natural abilities,” the king said.

“We’re not sure about that, either,” replied the king. “We don’t know if the same wolves are coming back over and over or if different wolves arrive each time hope is eaten alive.”

Kelsey looked at the king with a mixture of confusion and concern on her face. It’s one thing to go on a quest, but it’s quite another to go when you’re not sure what you’re going into.

About the Author:
Amy Neftzger published her first fiction book Conversations with the Moon in 2003. Since then she has published books for both children and adults, including All that the Dog Ever Wanted, Bedtime Stories for Dogs, Bedtime Stories for Cats, Leftover shorts, Confessions From a Moving Van, The Orphanage of Miracles, and The Ferryman. She lives in Nashville with her family and pet gargoyle Newton.