You are here: Home / Fiction / Paranormal / The Newfoundland Vampire by Charles O’Keefe 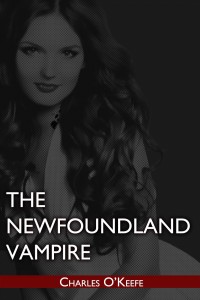 Like many geeks, Joseph O’Reily has always fantasized about being a vampire.

Then one night Cassandra Snow walks into his life and he learns that not all dreams should come true. Cassandra has plans for him – plans for eternity.

As his world begins to turn upside down, Josephs wrestles with the changes to his everyday life. Eternal youth and amazing power come at a price that might be higher than he can afford. Vampires may not be human, but Joseph is determined to hold on to what he values most—his humanity.

What Inspired You to Write Your Book?
To be honest the inspiration for my series came from boredom and a love of vampires. I was at work one day I realized I had all sorts of time to think and I decided to revisit a story I started some 6 years ago, a vampire story with a younger version of myself as the main character. I suppose I was inspired by the idea that if vampires were real, how would I act as one? What choices would I make? In more human terms I wondered about the choices I’ve made and how my life could have been different if I had chosen a different path. I was inspired also by listening to other authors talk about their love of writing and also by a friend of mine previously publishing a book back in 2006.

How Did You Come up With Your Characters?
I cheated a lot with one, Joseph (from my Newfoundland Vampire series) is based highly on me as I was at 23. I started with myself, then turned him into a vampire, then I had him make different choices than I did (naturally) and voila! He’s an improved version of myself for the most part. For the main female character, Cassandra, she’s a combination of a real person (Catherine Mandeville Snow) and my fantasy of a female vampire. She’s the first character who (after book 1 was written) felt real to me. While she has flaws and I don’t personally agree with all her views and actions, I think she’s a very distinct character and one readers often either love or hate.

Book Sample
As Joseph walked away, heading in the general direction of his parents’ house, he looked down at his bloody, torn shirt. The pain in his side had already started to fade. He probed gently with his fingers and found the wound had closed up. He glanced at his watch and noticed he could see the dial without pressing the light button. It was 10:35, and he recalled that he’d told Cassandra he would return to her room around midnight.

When he thought of Cassandra, he immediately knew the truth about what she’d done to him. Tuesday night she’d bitten him and drank his blood. Two nights later, he was drinking the blood of a moose out of some uncontrollable, instinctive need. What has happened to me? Is any of this real, or am I dreaming? Have I lost my mind?

He knew what had happened. He knew what Cassandra had done. He knew what he had become. The notion that he might no longer even be human hit him like an imaginary punch in stomach, and he leaned against a nearby tree to stop from falling over. His vision swam, and his mind churned as he tried to come to grips with the realization. As crazy and hard to believe as it was, he could come up with no other explanation.

He recalled a principle by William of Ockham, Other things being equal, a simpler explanation is better than a more complex one. He shook his head. Ockham’s razor. But was it even possible, let alone the simplest explanation? He admitted he’d harbored a deep, dark wish from the time he was thirteen of becoming a vampire, but he never imagined that it would ever come true. It was impossible. Vampires didn’t exist. So, then, what is this? What am I doing out here, drinking the blood of a moose and healing wounds? Am I having some elaborate delusion?

He tried to grasp the reality of his situation by reviewing what he knew. Cassandra slept all day. That first night they had spent together, she had bitten his neck. He’d fallen asleep next to her, dreaming she’d had blood on her mouth. She had expressed her desire to taste his blood several times. And she’d introduced him to the perversion of sharing their blood during sex. Her mannerisms and certain patterns of speech seemed oddly old fashioned.

In the last few days, he’d felt extremely weak during daylight and extremely powerful at night. He could hear and see better than he ever imagined possible. And there was the insatiable hunger he’d suddenly developed that could only be satisfied by blood. Could it be true? Instead of a made-up myth, vampires were real, and Cassandra was one – and now, so was he?