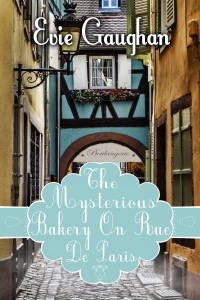 This is the magical tale of Edith Lane, who sets off to find her fortune in the beautiful city of Paris. Fortune, however, is a fickle thing and Edith ends up working in a vintage bakery in the positively antique town of Compiègne. Escaping heartache and singledom in Ireland, Edith discovers that the bakery on Rue De Paris is not exactly what it seems and that some ghosts from the past are harder to escape than others. A heart-warming story that is sure to appeal to all of the senses, The Mysterious Bakery On Rue De Paris is a mouth-watering journey of love, liberty and la vie en rose.

What Inspired You to Write Your Book?
The inspiration for this story actually came from a ‘foodie’ show on TV with Trish Deseine. She’s an Irish woman who settled in France and had a series teaching us wannabe chefs how to cook like a French woman. It was during one of these episodes that Trish explored a very old, very secretive bakery, hidden down a back street somewhere in Paris. No-one ever saw the actual baker himself and it was all very mysterious, but apparently the ‘well-heeled’ in the area insisted on buying their bread in this particular bakery. I can’t remember the entire story, or perhaps it was left as a complete mystery, but the idea of a bakery with a hidden secret intrigued me and the story grew from there.

How Did You Come up With Your Characters?
I wanted to write a story about a woman in her thirties who felt as though she had missed her chance to follow her dreams and so Edith Lane was born. I like the idea that, no matter where you are in life, there is no age limit on dreaming! I used my own experience as a student in Toulouse to conjure up the French cast of characters. I have always been slightly obsessed with all things French, so it was a delight to write about the beautiful town of Compiegne, which is almost like another character in the book!

Book Sample
The sky was completely dark by the time the train pulled into Compiègne station. I felt tired and hungry as I pulled on my coat and prepared to step once more into the unknown. Alighting the train, I noticed a young boy of about fifteen sitting on one of the two benches adorning the platform. He was engrossed in some sort of computer game and it was only when the wheels of my case announced my presence, did he look up from under his hoodie.

My instincts told me he was someone to be avoided, so I pretended I hadn’t heard and continued on my way.

Already he had taken the handle of my case and was leaving the station.

“But, wait, I…”, my words bounced off his heedless back. That was it; I’d had enough. I was tired, hungry and fed up of being treated like a nobody in this country.

“Oy, kid, you listen to me right? I’ve been travelling all day to get here, nearly went down in a thunder storm in the process, so I think the least you can do is address me like a civilised human being and tell me exactly where we are going, instead of herding me there like a lost sheep!” There, that felt so good and I was certain that I had left him in no doubt as to the cut of my jib.

He just turned casually and simply said, “La boulangerie,” as if it was the most obvious thing in the world, which in fact it was. He gave a little signal with his hand that I should follow and set off once again with my brand new suitcase rolling behind him.

“And just so you know, it’s Mademoiselle dammit!” I finished, determined to have the last word.

I finally caught up with my hooded guide as we entered an old cobbled street. The place seemed deserted and a million miles away from my Parisian dream. Still, it did have a old-world appeal and despite the cold and the dark, I did my utmost to feel optimistic about what lay ahead. ‘A hot cup of tea and everything will seem better’, I reassured myself. We walked along a river lined with benches and manicured trees, and crossed by ornate bridges leading to who knew where. I couldn’t imagine ever feeling at home or familiar with this place and if I had a dog, I would have told him we weren’t in Dublin anymore. Turning a corner, I was surprised to see a street full of wooden frame houses, like something out of Tudor England. The old section of the town was like a fairy-tale village and I half expected the walls to be made of gingerbread. Nothing seemed to have a right angle and dormer windows peeped out of crooked roofs with pointy hats on.

Overhead I saw a sign saying ‘La Boulangerie et Patisserie de Compiègne’, while on the corner of the building was a small sign with the street name, ‘Rue de Paris‘. Oh how I rued my ignorance.

“Well, it’s exactly what it says on the tin then; a bakery on the road to Paris.”

“Comment?” Manu drawled, as if the effort of speaking to a boring, middle-aged woman was too much of a drain on his time.

“Nothing, forget it, or what is it again… Laisse tomber?”

Something between a grunt and a sniff was all I got in return. He had a key and opened the glass panelled door to the bakery. I could feel my excitement return at the prospect of seeing my new ‘career’ in France. At first I noticed the floor tiles – exquisitely ornate and designed in peacock blue and gold, with hints of bright orange at the centre. The counter was plain, but functional and of course empty at the end of the day. The shop was just large enough to accommodate three typically French bistro tables and chairs, all located by the large front window looking onto the street.

A hefty art nouveau style mirror with a gilt gold frame took up the entirety of one wall from floor to ceiling, creating the illusion of a grander space. Sconces lit the honey coloured walls with a dim light and as my eyes adjusted, I found myself suddenly confronted with a sturdy looking woman dressed in a black skirt to the knee and a matching cardigan that fought admirably to contain her large bosom. Grey hair framed a sour face that held the echoes of kindness long since departed. Despite myself, I instinctively took a step back.

“Madame Lane,” she announced in a way that wasn’t really a question nor a statement.

With that, she padded silently behind the counter to an open doorway and began climbing some rather steep looking stairs. I turned around to thank Manu, but he had already left.

‘Welcome to France Edith,’ I muttered, picking up my suitcase.