You are here: Home / Fiction / Horror / The Muse: A Novel of Unrelenting Terror by Arjay Lewis 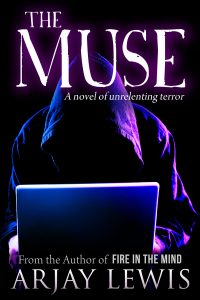 Famed novelist Jack Court has a secret: the wealthy writer is a serial killer. He has another hidden treasure, a small antediluvian creature that dwells within him and gives him youth, strength and a superhuman ability to avoid capture. On his trail is Sheriff Neil Trajan, who is certain Court murdered his wife three years earlier.
When the author is hit by a careless driver, the creature leaves him and through a series of events, ends up with lowly writer, Harold Godwine. Godwine begins to write faster and better, but is troubled by dreams of blood.
However, Jack is healing— and devolving into something not quite human. As Court seeks the young author, he leaves a trail of destruction, pursued by Trajan and his FBI associate, Bill Morris.
Will Jack Court do anything to retrieve the companion that inspires his dark desires?

What Inspired You to Write Your Book?
In June of 1999, out of the blue I had the desire to write a horror tale called The Dark. I had never written horror before and the idea of a night guard who saw things in the dark—that were actually there— was a leap for me. (That story eventually sold to H.P. Lovecraft Magazine of Horror.)
It wasn’t until the next day, when I read the news that Stephen King had been hit by a truck in Maine. I had the oddest feeling and I thought to myself, “It was as if something needed that story to be written and since he couldn’t, it moved to me.” This, of course, was the height of ego. Mr. King is an amazing wordsmith and teller of tall tales, and far more adept a writer than I. But the thought stuck with me and I wondered what it would be like if there was something— an actual physical entity that could help people write— and not just write, but write best sellers.
That concept became The Muse.
And of course, since it is a world unto itself, I could imagine a way that a famous writer in Maine could pass a story down to a beginner writer in New Jersey. I also upped the stakes, by having my famous writer change into a semi-human killing machine, so that the other writer would need to rise heroically to save himself and his family.

How Did You Come up With Your Characters?
The characters grew out of the concept organically. My hero, Neil Trajan sought justice from the antagonist, Jack Court. At first, he is carried along by the events that shifted Jack Court's life. However, his dogged pursuit of Court and the creature that dwelled within him, forced him to change his view of the world.
The lowly writer, Harold Godwine, gifted by the creature that gave Court his success is forced to face his own demons. Is fame and fortune more important that family and loved ones? It made the tale come alive for me and pushed me to find out pull all these disparate threads to weave together the final story.

Book Sample
She gave a nod to Franz and the image began to advance. Neil could see the internal organs move slowly as Godwine drew breath.
Suddenly, the nautilus shape turned an even brighter shade of yellow and quivered. It happened so quickly that Neil thought it was a trick of the eye.
“What the hell—” was all Neil could say.
“What did we just see?” Morris asked, stunned as well.
Dr. Ross pulled the pencil eraser with her teeth as she chose her words carefully. “Whatever it is, it’s alive.”

Buy The Muse: A Novel of Unrelenting Terror On Amazon