You are here: Home / Audiobook / The Midnight Sea by Kat Ross 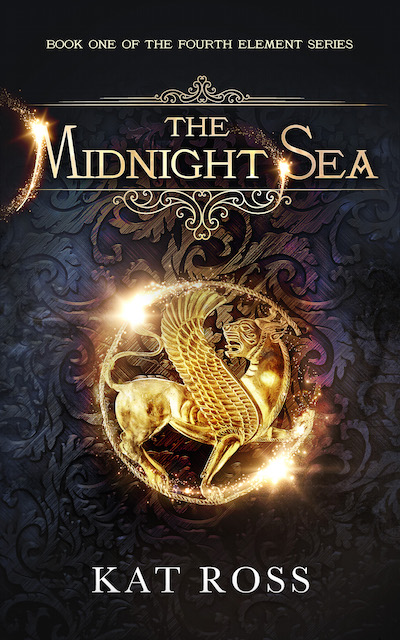 The Midnight Sea by Kat Ross

They are the light against the darkness.
The steel against the necromancy of the Druj.
And they use demons to hunt demons….

Nazafareen lives for revenge. A girl of the isolated Four-Legs Clan, all she knows about the King’s elite Water Dogs is that they leash wicked creatures called daevas to protect the empire from the Undead. But when scouts arrive to recruit young people with the gift, she leaps at the chance to join their ranks. To hunt the monsters that killed her sister.

Scarred by grief, she’s willing to pay any price, even if it requires linking with a daeva named Darius. Human in body, he’s possessed of a terrifying power, one that Nazafareen controls. But the golden cuffs that join them have an unwanted side effect. Each experiences the other’s emotions, and human and daeva start to grow dangerously close.

As they pursue a deadly foe across the arid waste of the Great Salt Plain to the glittering capital of Persepolae, unearthing the secrets of Darius’s past along the way, Nazafareen is forced to question his slavery—and her own loyalty to the empire. But with an ancient evil stirring in the north, and a young conqueror sweeping in from the west, the fate of an entire civilization may be at stake…

What Inspired You to Write Your Book?
I've always loved epic fantasy, but I really wanted to do something a little different for this trilogy. The one-liner for The Midnight Sea might be Gladiator meets Romeo and Juliet in ancient Persia. With magic. The plot is fast-paced, but the heart of the story is the things we do for love—and hate. When The Midnight Sea opens, the wealth and military power of the empire is intimately connected to the slavery of creatures called daevas. They can wield the elements of earth, air and water and make deadly soldiers. The priests teach that they're Druj—impure. But as the human protagonist trains with her own daeva, she comes to question everything she's been taught about them. So the first book focuses on her evolution and eventual rebellion, while the next two develop conflicts in the larger setting. I mean, what's epic fantasy without a diabolical demon queen?

How Did You Come up With Your Characters?
Nazafareen is the main character of the series. I like her because she's so different from me. Reckless and hotheaded with almost zero filter between mouth and brain. But deep down, a very moral person who will do what's right whatever the cost. Her daeva, Darius, is more of a slow burner and has his own ghosts, so their relationship is complicated. But frankly, it's the bad guys in the series that are some of my favorites. I don't want to give any spoilers for the first one (where there's a major betrayal), but there's a necromancer who starts to get his own POV as the series goes on. His name is Balthazar and he's bad but not pure evil. I think of him as morally grey—something he surprises me with his decency, other times he's utterly repugnant. Those unpredictable characters are the ones I enjoy writing best.

The story pushes all of the characters, good and bad, to their limits, emotionally and physically. I think if you want to see what people are made of, you have to methodically strip away every illusion they hold dear. I spent a lot of time pondering exactly what my characters' worst nightmares would be and then making them come to pass. It might sound silly, but I felt pretty bad about it, especially toward the end. They all seemed so real to me, I found myself muttering apologies as I typed. But there's redemption too, and a reasonably happy ending, so I made peace with the horrible things I did!

Book Sample
My eyes flew open at the crack of dawn. I groaned and rubbed my forehead. My scalp tingled, an icy, unpleasant sensation. I knew right away where Darius was and what he was doing. It was another side effect of the bond, I'd discovered. I could feel his heart beating. I knew that one of his boots was too tight. I could shut my eyes and tell you exactly where he was, even if he was hundreds of leagues away.

Why had no one told me what it would be like? I supposed Tijah did, but this was much worse than I'd expected. Much, much worse.

I threw on my new scarlet tunic and marched down to the river. Tendrils of mist swirled through the dead reeds at the edge. It was late autumn and the air had a dank chill that promised snow.

My daēva stood there, stripped to the waist, pouring water over his head with his right hand. He wore a gold faravahar on a chain around his neck, its eagle wings spread wide. His left arm lay at his side, grey and dead. I stared at his shoulder, at the juncture where smooth skin met rough. His Druj curse.

He was calmer this morning, but I wasn't. I stopped about twenty feet away. He didn’t turn around although he knew I was there.

"It's nice that you're so pious," I said. "But don't you think it's a little early to be down here performing the morning rites?"

He paused, then dumped the last of the water from the bowl. I felt the cold trickle down my spine and my lips tightened.

"I was taught by the magi to come at first light," Darius said. "Did you expect to sleep in? I'm afraid that's not the way it works for Water Dogs." He smiled, and we both knew it was fake. "I'm sorry if I've offended you in some way."

I stared at him, at the dark hair plastered across his forehead, his stubborn mouth. He looked so human. And yet there was something in the way Darius held himself, perfectly at ease in his own skin. Still but coiled, like the wolves I'd seen in the mountains.

"You haven't offended me in the least," I said. "I suppose you need the blessing more than I do."

I spun on my heel and walked away, knowing I had wounded him. A small stab to my own heart. And I felt slightly ashamed. But that wasn't the end of it. Then I felt his satisfaction at my shame. And my own anger that he knew and was glad.

And then his amusement at my anger!

I stalked off, determined to think nothing, to feel nothing, ever again.

If only it were that easy.