You are here: Home / Fiction / The Mended Fence by James Fant 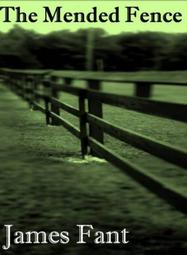 Grey Harrison cheated on his wife. To make amends, he works overtime so he can buy her a $14,000 diamond ring. But when he comes home early from work and sees his wife cheating on him, what follows is a folly filled night of gunshots, damaged property, and a bank robbery. Grey discovers that when he saw his wife cheating on him, he only saw what he needed to see. And ultimately he finds out that he would not be able to mend the fence that was broken on his own.

What Inspired You to Write Your Book?
Sometimes people err and try to resolve their issue on their own. But there are some errors that we’ll need help to fix. And sometimes, in trying to right a wrong we end up doing more harm than good. I wanted to bring across that message through the power of fiction.

How Did You Come up With Your Characters?
Divine inspiration and a crazy imagination.

Book Sample
Grey’s brow was raised as he made his way to the front porch. Buzzed, yet collected, he connected with the front steps. And that’s when he heard it.
“Oooooooh.” Moans coming from the other side of the front door.
“Oooooh, Ahhhhhhh.” Wild, desperate moans, seasoned with grunting; feral, heady moans, hefty cries of zeal and excitement.
And that’s when he saw it through the front glass; the micro-braids Zion had become famous for bouncing freely atop her bare shoulders as she made sweet love to an unknown brother. Huffing and puffing. Grunting and grinding. Curse words and carpet burns.
The two lovers strove with each other like two wild beasts chafing each other with reckless abandon amongst the briars of the thicket, speaking to each other in some unknown speech, not speaking any words recognizable, mumbling actually. Their members becoming entangled, in fact.
A few stomps of the work boots later, Grey found himself searching under the front seat of his truck for his gun.
“Got it!” Cocked it!
No diamond for Zion. Lead would have to do. Bloodshed was inevitable.

About the Author:
James Fant is a Kingdom businessman, husband, father and friend. James is passionate about helping people to improve their personal relationships through the power of inspirational fiction. One could call him a champion for the “mended fence,” which incidentally is the title of the first story that he ever published. James is a huge fan of romance, action, and suspense, and that shows in his writing. However, James avoids the use of lewd language and racy sexual scenes when he writes.