You are here: Home / Fiction / The Man with the Blue Hat 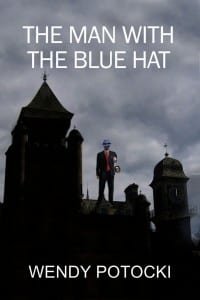 Beth’s life is perfect, but then she’s constructed it to be that way. She never steps outside the boundaries and never colors outside the lines, but something happens to crumble it all away. Something in the middle of the night—something no one can remember. Something that brings on a spate of insomnia that affects the entire community. When Sadie, the town drunk, accuses her of being the cause, she reacts in shock and fervent denial, but Sadie is insistent. She’s certain that an evil Beth committed is the cause of bringing ruin and calamity to their fair city. She knows it’s all untrue, but as the sleepless nights continue, the paranoia grows. Soon a chorus of voices are added to Sadie’s—even her best friend’s. Fighting against the tide rising against her, her adamant defense begins to falter when a strange man knocks on her door. Delivering an ominous message to her daughter, Kirsten, it strikes at the heart of the mystery, and portends a horrific fate that awaits them all.

The Man with the Blue Hat is classic horror. It’s a chilling, page-turner … a bedtime story designed to evoke nightmares. It’s scary good.

Wendy Potocki lives and writes in NYC. If that isn’t scary enough, she writes in the genre of horror. She feels creating good horror is an art form. She religiously devotes herself to pursuing it over hill and dale … and in the crevices of her keyboard. She has four self-published novels: The White Lady Murders, The Horns of September, The Man with the Blue Hat, and her latest, Adduné: Part I. The Vampire’s Game. Book trailers for many of her works may be found on her official website http://www.wendypotocki.com/. Her next planned projects are Black Adagio, The Virgin, and the second installment of Adduné entitled The House of Cards. The Adduné saga is a three book series that is as much as an adventure to write as to read. “Many, many hours of research are going into making this a sweeping, exciting tale about love, revenge and the hidden power lying dormant within the soul.” In her spare time, she loves to go for long walks, drink Starbuck’s Apple Chai Lattes, make devotional offerings to her cat named Persephone, and be stilled by the grace, beauty and magic of ballet.