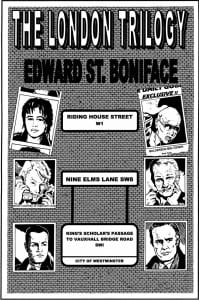 I’m a newbie author just in the process of publishing myself for the first time, in the form of a trilogy set in contemporary London. The loosely related novels each star a protagonist who pursues his ambitions relentlessly in London from the 1980s up to the present, each on fire with ambition and hubris.

Alderson Lupton becomes a world famous pop star, but in the process destroys and loses everything he loved and dreamt of.

Evel Tyler becomes the most influential and feared rock reporter in London’s cutthroat competitive tabloids but cannot rise above his muckraking, mudslinging world to higher literary and journalistic aspirations, for he has lost his conscience. Then he is unexpectedly called upon to be an improbable conscience himself.

Lucas Bellator is an irreproachably honest and incorruptible political correspondent, but even so must face a corrosive temptation to abandon his ethics that is so great it may destroy his very soul.

Along the way these young and then embattled middle aged men discover the true price of success. They have to confront the corruption of their dreams. Finally each recognize and accept a need to search for redemption. Each has a catalogue of sins accumulated on the way of getting to the top of their respective professions that come to poison their lives.

Individually they must inevitably make harsh choices to sacrifice what is most precious to them in their different ways. Only this way can they begin to regain the almost-lost hopes they started with. All this happens against the splendid rewards and crawling underbelly of London, showing the very best and worst the city offers to the favoured few and those who betray their own gifts.

On a low budget I’m doing the primary marketing myself and am keen to be reviewed. My publisher tells me the books (a printed trilogy and separate ebooks with additional chapters will be released) will be on NETGALLEY from the beginning of November, under the titles of ‘THE LONDON TRILOGY’, ‘RIDING HOUSE STREET’, ‘NINE ELMS LANE’ and ‘KING’S SCHOLAR’S PASSAGE TO VAUXHALL BRIDGE ROAD’.

I can supply .pdfs of the first three chapters of each novel. I realise how many requests and volumes of material you must get, so this would be a quick way to gauge if you like my work. If you like what you see and read, I look forward to hearing from you.

How is Writing In Your Genre Different from Others?
I’m not sure – I resolutely write in the first person singular and very subjectively. I like playing with the unreliable narrator and counterpointing that with perspectives from other characters in the story using more objective dialogues and recordings and the like. So I try to create an imbroglio of uncertainty.

What Advice Would You Give Aspiring Writers?
Don’t listen to advice. I’m not being flippant; most advice I’ve ever been given has been largely negative or urging me simply to try imitation. That ultimately won’t get you very far, since you’re only following on from other established successful authors who already occupy that ground. I believe you have to experiment creatively first and find your voice, and that takes following only your own writing instincts and making your mistakes along the way. So my sole advice would be: start a fund with which you intend to publish yourself if you can’t get the attention of editors or agents or publishers. You also have to be prepared not to make a profit doing this. If you’re willing to lose money over your own work then you really are serious about it.

Author Bio:
I’m a 46 year old newbie author, with some small press publication over the years. THE LONDON TRILOGY is the first time I’ve formally published any novels and I’m paying to publish them myself having failed to get any interest from agents, publishers or editors. But since I crave to be read I did it anyway! Originally from Canada, I emigrated to London UK 27 years ago and have alternately loved and loathed the Capital ever since. After a long period writing largely science fiction and fantasy I decided to try my hand at the real and concrete world; or as close an approximation to it as I could generate given my tendency towards extremes. I’m currently a resident of London’s Westminster within a Corgi’s jump of Buckingham Palace, the Palace of Westminster and other houses of ill fame!

What Inspired You to Write Your Book?
I needed to see if I could write compelling stories set in the present day and make them as interesting as I’d earlier hoped my science fiction and fantasy work had been. I planned to write one book experimentally, about the rise and fall of a pop star, and gauge how successful I’d been with it. To my own surprise I could not stop writing the loosely connected stories of three ambitious young men starting in 1980s London and finishing as embattled middle aged men each searching for redemption of their past sins committed in getting to the top of their respective professions.