You are here: Home / Fiction / Action & Adventure / The Legionnaire: Origins by SJ Parkinson 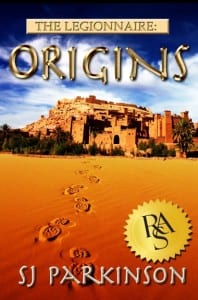 (Book One of the The Legionnaire Series)

At a remote French Foreign Legion fort in the middle of the Algerian desert, Sergent Étienne Martin drinks himself numb every night. A paratrooper, talented soldier, and respected Non-Commissioned Officer, the alcohol is his way of escaping the oppressive atmosphere of the camp. Under the iron hand of Colonel Rochon, no breach of the rules is tolerated and fear rules the base.

Anger, frustration, and desperation are the norm as Martin endures the last three years of his contract. Morale plummets, and desertions are frequent. Life inside the fort walls becomes an endless grind.

Martin discovers millions of Euros have been taken from the fort accounts for personal gain. His duty demands he report this to his superiors. Discovering how widespread the conspiracy is, Martin must decide whether to stand against hopeless odds, or run to fight another day.

How is Writing In Your Genre Different from Others?
In this novel specifically, the action begins in Algeria them moves through Lebanon, Morocco, Singapore, France, United Kingdom and the US. I take the reader on a voyage across half the world.

What Advice Would You Give Aspiring Writers?
Write at least a page a day. It gets easier as you go and you’ll increase your output as you get into the habit of writing.

Author Bio:
Mr. Parkinson was an Air Force avionics technician, a decorated veteran of the Persian Gulf War and several peacekeeping missions. He has lived overseas in numerous countries and travels extensively. He has written a newspaper column on computers and been published in several magazines.

What Inspired You to Write Your Book?
I visited Egypt in 2006 on vacation and got to see King Tut’s gold burial mask in person. It’s an amazing piece of history. Later I read about the Gardner Museum theft and the two items coalesced into the backdrop for The Legionnaire trilogy. When I tried to develop a protagonist, I wanted him to have a military background, but all of the military services had already been used in famous novels. That’s when I remembered the French Foreign Legion. Through research, I discovered that what people thought they knew about the Legion was mostly inaccurate. Good fiction grows best in the shadows, so I used the Legion and everything else fell into place around that.