You are here: Home / Autobiographies, Biographies & Memoirs / The King of Casinos: Willie Martello and the El Rey Club by Andy Martello 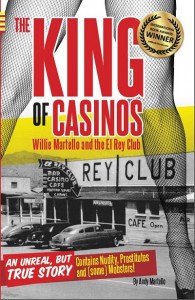 WINNER OF 13 AWARDS including BOOK OF THE YEAR!
A story SIXTY YEARS IN THE MAKING!

After a horrific blaze destroyed Willie Martello’s El Rey Club in 1962, fifty years would pass before anyone knew of how that casino and one-time brothel influenced LAS VEGAS casinos, upset the mob, and inadvertently launched the career of Francis Ford Coppola.

Were it not for the chance discovery of a single photo in a Las Vegas museum, the El Rey Club would only be known as the seedy brothel where Senator Harry Reid learned to swim. Martello’s accomplishments should place him among magnates like Howard Hughes or Steve Wynn, yet very few knew his name until now.

Featuring over 140 rare or unseen photos, these vibrant stories are now brought to light!

What Inspired You to Write Your Book?
While vacationing in Las Vegas, I came across a rare photo of the El Rey Club, listed only as a casino and brothel on the way to Laughlin, Nevada. On the photo was the name “Willie Martello.” With my last name being Martello, I have encountered very few people with the same last name, other than family. I immediately became fascinated by the photo and curious to learn about this mysterious Willie Martello. Was he still alive? Was the El Rey still in operation? Were we related?

I set out to find out whatever information I could and soon realized there was very little known about the man and his tiny casino. My only intention was to gather a few funny facts and see if I could find a poker chip or some other trinket from the place for my wall. It was meant to be a hobby. Nothing more.

Little did I realize, this chance discovery of a photo on a museum wall would lead down an EIGHT YEAR QUEST to bring the incredible story of one of Las Vegas’ gambling pioneers to light.

The King of Casinos is the culmination of nearly a decade of interviews, collecting, and scavenging the junk yards, museums, and libraries to learn the truth about a casino which changed how Las Vegas does business forever.

Book Sample
On January 22, 1962, a prostitute, new to the town of Searchlight, emerged from one
of the rooms at the El Rey Motel. Having heard good things about the cash available to a girl
willing to spend a little quality time with strangers in Searchlight, she came to town hoping to
find some action.

She was absolutely glowing with the excitement and satisfaction of knowing she had
made the right decision. After all, the night before she met a man of obvious charm, but what
was more obvious to her was that this guy had MONEY. Her new client had spent most of the
entire evening with her and was more than happy to pay her well for her services, showering her
with many a black $100.00 poker chip from the El Rey Resort & Casino. She must have earned
thousands of dollars that night from this one man alone.
Soon after making her exit from the man’s El Rey Motel room she went up to the cashier
wanting to know where she could cash in her fortune.
“Lady, you aren’t cashing those things in for shit. The El Rey burned to the ground last
night.”

“Our show was one of two groups playing the El Rey that week. We had played the first
show and I had gone back to my room at the motel to shave,” recalled Laursen. “That afternoon
I had driven 60 miles to Las Vegas to pick up dates for Barry Kaye and me. An accident had
caused car travel on the highway to move very slowly and I arrived in Searchlight just in time for
the show.” Nearly being late for a show was about to be the least of his concerns.

“We were off stage and they [the DeCastros] were on at the time,” recalled Veronese,
“and we were just sitting down to dinner.” While the DeCastro Sisters played their set and
members of the Tony Lovello revue scattered to take their break, Bob Martello, working the
casino pit, recalled a commotion emanating from the kitchen. The chef came out, visibly upset
and sweating. “There’s a fire in the kitchen,” he told Bob. Unfazed and not wanting to cause
alarm, Bob casually replied, “There’s ALWAYS a fire in the kitchen. Go put it out!”
“After the first show went off I went to the kitchen to see if we could order a couple of
hamburgers,” said Lovello. “I was surprised to see that there was a grease fire already going up
the hood.”

The chef ran back out to find Bob, “There’s a BIG fire in the kitchen!”
“I could tell it was a blaze,” said Lovello of the fire. “I ran out and told the girls to get to
the dressing room as quickly as possible and throw everything out the dressing room window.”
Since he feared the fire could rapidly get worse, it was time for everybody to start making an exit
from the club. “Needless to say, I told the band to not ask questions, get the band stand, and
pack up now.”

“As I put the lather on my face,” said Laursen, “the drummer, Joe Veronese, pounded at
my door yelling that the club was on fire. I grabbed a shirt, wiping shaving cream as I ran.”
Laursen would go on to describe what appeared to be an otherwise normal night at
any other club or casino. “The other group was in the middle of their first show. People were
drinking and gambling,” he said. The fire spread and rapidly grew in the kitchen, unbeknown
to the customers outside in the casino. “Suddenly a large bubble appeared in the paint of the
ceiling above the middle of the casino,” recalled Laursen. “It was as if someone were inflating
a balloon. It grew to about 5 feet across.” Soon the paint bubble would reach its maximum
capacity and “as if it had been stuck by a pin it returned to its proper place.” An eerie, smoky
sigh emerged and echoed throughout the casino, accompanying the band on stage, still playing.
Veronese and Laursen ran to the dressing room.

Kenny Laursen continued to describe the frenzy to me. “The building was concrete block
construction with windows that had cranks to open and close. We opened two of them and
started passing instruments, cases, and costumes out the window to another band member who
stacked them up by the pool area. After we had removed everything, we went back into the
casino and told our dates to leave.” Still, the other band played on.

Kenny went up to the stage and subtly told one of the band members what was
happening. “About that time someone from the pit came up to ask them to announce that the
customers were to calmly exit to the parking lot.” Joe Veronese remembered a representative
from the El Rey Club asking, “Could you give us a hand clearing the place? We’ve got a little
bit of a kitchen fire,” which proved to be something of an understatement. “We started to ask
people to leave. We all headed in different directions toward different tables,” said Veronese.
“Pit bosses were gathering up the money and asking the folks to leave the casino,”
recalled Lovello. Kenny Laursen would confirm, “Security then came up to the stage and
herded everyone out the front door.” Tony Lovello remembered, “It was very orderly as they
filed out.” As orderly as it was, not all of the customers were happy about their situation. “I’ll
never forget the look on one guy’s face,” said Veronese. “He had just handed the dealer a
hundred and the guy dropped it when we told them he had to leave.” Veronese continued,
laughing, “The dealer handed him some chips and he took off!”

“Flames from the brick and wood building soared high over the small desert community,”
wrote the Review-Journal of the blaze. From as far away as the Railroad Pass Casino, just
outside of Henderson, Nevada, and on the way to Boulder City, smoke and flames could be seen by Ethel and Buddy Martello, who were driving in from Las Vegas to start their night time shift. “We saw the smoke and we just knew it was the El Rey,” recalled Ethel. The couple
increased their speed, hoping to be able to arrive in time to put out the blaze. Kenny Laursen
described the scene outside. “The fire spread to more than half the roof area.” Joe Veronese
recalled, “Just about the time we got everybody outside, we looked back and the whole roof was
in flames.”

“Just across the street there was a gas station. We were standing out in front of it,” said
Veronese. The Tony Lovello drummer noticed there were no flames emanating from the back
of the El Rey. “I told Kenny, ‘the back part’s not burning. I oughta go back, bust that window
and get our stuff.’” Against all better judgment, Laursen and Veronese went to the back of
the casino and noticed the back window was open. Joe Veronese crawled through the open
window and began to shove equipment outside to Kenny. After they had successfully moved
the equipment and clothing out of harm’s way, the realization that something had been left
behind fell over them. A string bass and an amplifier were still inside the building. Veronese
remembered Art, the bass player, asking if they could retrieve his string bass. According to
Laursen, “Joe climbed through the window into the pitch black dressing room and opened the
door to the stage.”

“That’s when the lights went out,” said Veronese. With that, a massive swell of fresh air
rushed into the burning building, letting out a loud, thunderous sound. “The concussion was
tremendous,” said Kenny. “Kenny said when I hit the wall across the room my feet were on the
ceiling,” laughed Veronese.

After the booming blast of sound had subsided, Kenny called out to his band mate from
outside the open window. “I yelled for Joe and got no answer.” Kenny crawled through the
window hoping to find Veronese, fearing the worst. “I found him barely conscious, lying on
the floor. I dragged him to the window, lifted him upright, put his head and shoulders over the
window sill then lifted his legs up and shoved him through the opening,” said Laursen. “I could
hear glass breaking and things crashing inside the casino by now and didn’t waste any time
following Joe out the window.” The two men walked across the street to safety “just as the
Searchlight Volunteer Fire Department pulled up in an ancient fire truck,” according to Laursen.