You are here: Home / Fiction / The Journey to Whitestone by Johnny Ray 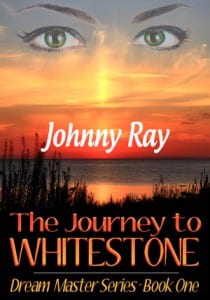 THE JOURNEY TO WHITESTONE, an 82,000-word paranormal romance, and the first in this Dream Master series, is set in Atlanta, Georgia and the Great Smokey Mountains of Tennessee.

As Jacquelyn Parker struggles with her life spinning out of control, resulting in a bitter divorce, and her career ruined, she is sucked into a sinister world of late-night sleazy bars. It is her last minute prayer that fortunately finds its way to the Dream Master who controls the gates to Whitestone, a side door to heaven, and the next step in enlightenment. From her dreams she learns that she only has one chance to reunite with her one true love and advance to the next level of enlightenment.

In order for Jacquelyn to master the four steps of enlightenment and find her true love, the Dream Master summons the assistance of other enlightened ones who teach Jacquelyn various philosophies from the Tai chi to the Karma Sutra to guide her path.

After centuries of missing her true love in time and space, Jacquelyn has only one last chance to get it right, and live the ultimate happy ever after life. If she is unsuccessful, however, she will have to live with the tragic failure forever.