You are here: Home / Fiction / Horror / The Invisible People by A L Maher 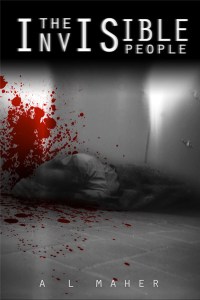 What is worse – A psychotic shape shifting demon killing the city’s homeless, or the fact that no-body notices? Dan Clifford noticed, and that could be fatal.

Season one follows the story of Dan Clifford, a city commuter with a big heart. Shuffle, Spits, Morgan and Preacher – a group of homeless people, and Monk, a street kid who is more than she appears to be.

What Inspired You to Write Your Book?
Australian Demonic creatures never really get a look in, in todays popular creature culture. I wanted to explore the concept a little and see what I could come up with using a very Australian form of evil.

My initial thoughts are to entertain and build up a readership that would be interested enough to purchase season two. The future plan would be to donate some of the monies raised to the local shelters and try to do some good.

How Did You Come up With Your Characters?
The old saying, write what you know … I shall leave it at that I think.

Book Sample
A girl sat slouched against the side of the building, a vacant stare fixed upon the opposite wall as rain played across her face. She didn’t shiver from the bitter wind howling through the gaps between the high-rise buildings. Nor did she flinch as a fly, slow moving and close to a winter’s death, chose her lips as a landing place and sought shelter from the cold inside her still and open mouth. She just stared, her upturned palms resting in the pool of scarlet spreading around her, diluted by the litter-strewn puddles.

About the Author:
I started writing 12 months ago and with much encouragement, several workshops and a huge learning curve, finally feel like I have something that is worth sharing. I started with small, funny stories for my children. Which led to taking an interest in a more “grown up” tale. As a big fan of the horror genre I naturally fell into that dark and dank world. However, I have been know on occasion to poke my head up and tell the kids a funny story or two.