You are here: Home / Fiction / Romance / The Handfasting by David Burnett @DavdBurnett 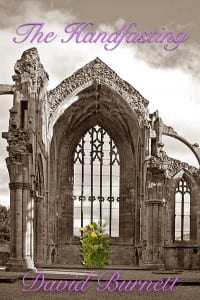 Ten years had passed since they had joined hands in the ruins of the old abbey church. Standing before the high altar, they were handfasted in the Celtic custom, engaged to be married.
A rose bush had bloomed beside the ruined altar. Stephen had reached out to caress one of the flowers.
“I’ll find you,” he had said. “In ten years, when we have finished school, when we are able to marry, I’ll find you. Until then, whenever you see a yellow rose, remember me. Remember I love you.”
In those ten years, Katherine had finished college, completed med school, and become a doctor. In those ten years they had not seen each other, had not spoken, and had not written.
It was what they had agreed.
For a decade, she had been waiting, hoping, praying.
Today ─ her birthday─ she finds a vase of yellow roses when she reaches home.
Stephen, though, is not Katherine’s only suitor. Bill Wilson has known her since they were in high school. He has long planned to wed her, and he finally decides to stake his claim.
Although the action occurs primarily in New York City, psychologically, the story is set in a small town in Virginia. Change came slowly to the rural South in the nineteen-seventies, and attitudes toward women were most resistant to change. Women were expected to be subservient to men, to have children, to keep house. A woman was to be above reproach, and any hint of scandal was met with censure, with ostracism, with shame. These attitudes threaten to destroy Katherine and the life of which she dreams.
The Handfasting is a story of love renewed, a suitor spurned, a vicious attack, a struggle for healing. It is a story of love that survives.

How is Writing In Your Genre Different from Others?
In Romance, the love story is central. In other genres, love may have a role, but the focus of the story is on action, on adventure, on solving a mystery. In a romance novel, the focus is on the love of two people and the complications that surround them.

Author Bio:
David Burnett lives in Columbia South Carolina, with his wife and their blue-eyed cat, Bonnie. The Reunion, his first novel, is set in nearby Charleston. The Handfasting is his second novel. While most of the events in the story take place in New York City, psychologically, the story is set in the rural South of the 1970’s.
David enjoys traveling, photography, baking bread, and the Carolina beaches. He has photographed subjects as varied as prehistoric ruins on the islands of Scotland, star trails, sea gulls, and a Native American powwow. David and his wife have traveled widely in the United States and the United Kingdom. During one trip to Scotland, they visited Crathes Castle, the ancestral home of the Burnett family near Aberdeen
David has graduate degrees in psychology and education and previously was Director of Research for the South Carolina Department of Education. He and his wife have two daughters.