You are here: Home / Fiction / Science Fiction / THE HAND OF MY ENEMY by Mary Vigliante Szydlowski 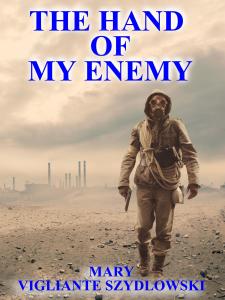 In the deadly game of war, player nations must continually “up the ante” on their enemies. Sparing no expense to create an arsenal of ever more lethal, ever more destructive weaponry. But an escalating arms race can have unintended consequences. Cataclysmic, catastrophic consequences!

What Inspired You to Write Your Book?
Nations states engage in war for a variety of reasons: territory, religion, race, ethnicity, when they feel threatened, or because they covet another nation’s resources or treasure. They wage war in response to rumors: rumors of barbarism and brutality, of heinous acts, or the stockpiling or development of new weapons of mass destruction, The list is endless. They say they want peace, but the sad truth of the matter is that war is good for the economy, good for business!

How Did You Come up With Your Characters?
Ozrik and Crax, are bitter enemies whose sole concern over the years has been the annihilation of the other and the subjugation of his nation. They wage war by rote. Every so often they have to make the enemy’s country suffer and bleed, similar to the way we do things here on earth. It’s what they do! It’s their nature!

Book Sample
The news, when it arrived, was worse than anyone had imagined. This was the greatest calamity in the history of the world. The apocalypse! The once mighty island continent of Galt now lay in ruin.

The explosion generated by the bomb at Carg was far more powerful than had first been thought. The underground vaults, where the weapon had been tested, were not sufficiently hardened; and on detonation, had literally blown apart, sending flames, dust, and debris a thousand feet into the sky. But the bomb was only the catalyst. Fields and forests ignited, as did frame buildings and fuel storage tanks, anything combustible. In a matter of moments the entire area was swept by a firestorm, a conflagration where metal melted and raging winds incinerated everything in their path.”

The quakes cracked pipes in the cooling systems of reactors hundreds miles from Carg. Seconds later everything burst into flame. Workers panicked, leaving their posts in a vain attempt to save themselves. Water quickly drained from the cooling pools, exposing the uranium rods. The cores began to melt, producing a toxic fog of caustic, highly volatile gases. Explosions blew apart the containment buildings, releasing clouds of poisonous steam and smoke laden with lethal radioactivity into the air.

The same scene was repeated over and over again as firestorms swept region after region in an ever-widening circle of death and destruction.

Her short stories, articles, children’s stories, essays, and poems have appeared in books, magazines, newspapers, and on the web.

She is a member of the Authors’ Guild, the Authors’ League, SCBWI (Society of Children’s Books Writers and Illustrators), and SFWA (Science Fiction & Fantasy Writers of America).