You are here: Home / Fiction / Drama / The Guilty by Gabriel Boutros 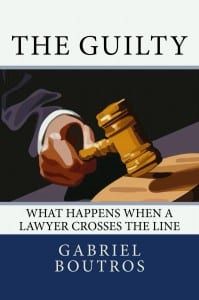 Robert Bratt is a veteran defense attorney whose faith in the justice system, and the role he plays in it, wavers when his daughter’s best friend is raped and the rapist is acquitted. The rapist’s lawyer twisted the victim’s testimony around to make her look like she was the aggressor, and Bratt knows this is exactly what he would have done in his place. But his daughter hates all lawyers now, including him, and that causes him to question the way he has always practiced his chosen profession and the violent people he represents. Then, Jennifer Campbell, a devoutly religious woman, hires him to defend her son, Marlon Small, who is accused of a brutal double-murder. Despite Campbell’s protestations, Bratt’s instincts tell him there are some things that Small isn’t telling him. But Bratt’s drive to succeed, combined with his sympathy for the heartbroken mother, push him to defend the young man. Can he continue to turn a blind eye to what his client might have done, and manipulate the truth as he so often has in the past, all in order to defend “The Guilty?”

How is Writing In Your Genre Different from Others?
Everybody has some idea of what a courtroom looks like, and how most legal systems function, so the writer of a courtroom drama or legal thriller can’t fool the readers by making things up out of whole cloth. Even though this world is familiar to so many people it has very particular rules and a distinctive language, and the readers will expect to see certain things to be sure the writer is familiar with his topic. At the same time a book in this genre should always try to show the reader something about that world that he might not have known before. If it’s well done, it will reveal, not just the guilt or innocence of an accused, but the thoughts and motivations of the many people who dedicate their life to the judicial system. While the story is fiction, it has to be grounded in fact and day to day reality, which means lawyers are not detectives, nor are they action heroes.

What Advice Would You Give Aspiring Writers?
I can only borrow the advice that I was given and tried to follow along my own very uneven and far from complete writing path: First: Read a lot. Second: Write a lot. Not very original, is it? However, I would add that it doesn’t really matter if what you read or write is any good, as long as you use the bad parts to learn and improve your writing.

Author Bio:
I have lived most of my life in Montreal, where I practiced criminal law for 24 years. I’m married and have two sons. During our long, cold winters when I’m not working or writing I will be obsessing over the fate of the Montreal Canadiens hockey team. That’s pretty much obligatory if you live in this city. I’ve written lots of short stories, many of which were pretty bad, but two of which I managed to get published. This encouraged me to work a little harder and finally to release my first novel, The Guilty.