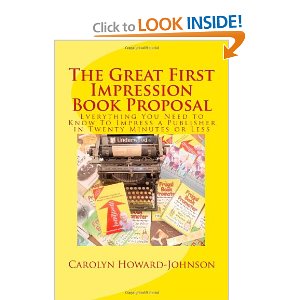 The perfect learning experience for those who want to wow an editor in no time flat with only $6.95 out-of-pocket and 30 minutes out of a busy schedule.

This booklet is the result of multi award-winning author Carolyn Howard-Johnson’s extensive work with clients who hate writing book proposals and hate learning how to write them even more. She found herself coaching them through the process rather than doing it for them, for who could possibly recreate the passion an author feels for his or her own book better than the author? In doing so, she found she had written a booklet—not a tome—that took her clients only about thirty minutes to absorb. Voila! The Great First Impression Book Proposal was born.

Author Bio:
Carolyn Howard-Johnson’s first novel, This is the Place, won eight awards and her book of creative nonfiction, Harkening: A Collection of Stories Remembered, won three. Her fiction, nonfiction and poems have appeared in national magazines, anthologies and review journals. A chapbook of poetry, Tracings, was named to the Compulsive Reader’s Ten Best Reads list and was given the Military Writers’ Society of America’s Silver Award of Excellence. She speaks on Utah’s culture, tolerance, and book promotion and editing and has appeared on TV and hundreds of radio stations nationwide. The first edition of The Frugal Book Promoter was named USA Book News’ “Best Professional Book” and the Irwin Award. The second edition is also a USA Book News award winner. Her The Frugal Editor: Put Your Best Book Forward to Avoid Humiliation and Ensure Success also won a nod from USA Book News and won Readers’ Views Literary Award. Her marketing campaign for that book won the marketing award from New Generation Indie Book Awards.

Howard-Johnson is the recipient of the California Legislature’s Woman of the Year in Arts and Entertainment Award, the Book Publicists of Southern California’s Irwin Award and her community’s Character and Ethics award for her work promoting tolerance with her writing. She was also named to Pasadena Weekly’s list of 14 women of “San Gabriel Valley women who make life happen.” She is also an instructor for UCLA Extension’s world-renown Writers’ Program

The author loves to travel. She has visited eighty one countries and has studied at Cambridge University in the United Kingdom; Herzen University in St. Petersburg, Russia; and Charles University, Prague. She admits to carrying a pen and journal wherever she goes. Her Web site is www.howtodoitfrugally.com.

What Inspired You to Write Your Book?
My entired HowToDoItFrugally series of books was inspired by the Writers’ Program at UCLA. They hired me to teach classes and I wanted to recommend how-to books that were practical, based on experience, and not as dry as the Sahara. The first was The Frugal Book Promoter. The rest is history. (-: