CERN’s Hadron Collider is the world’s most powerful machine; its sole purpose is to prove the existence of the mysterious God Particles – the essential building blocks of the universe. But after a series of global catastrophes, suspicion arises as to whether they are occurring naturally or are somehow connected to the collider’s experiments.

After the sudden death of the project’s director general, professor of physics at Massachusetts Institute of Technology, Tom Halligan, is headhunted by CERN’s governing council to continue the search for the elusive particles.

He is soon embroiled in a titanic struggle against sinister forces that are intent on creating a chain of events, the outcome of which will determine the fate of mankind.

The battle to save the planet from annihilation is being fought by the most unlikely of heroes. 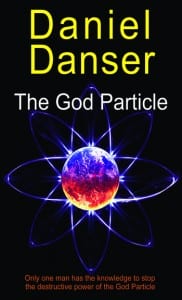 How is Writing In Your Genre Different from Others?
Although the genre could be described as Science Fiction, The God Particle is based on Science Fact. It’s an Action & Adventure novel with conspiracy undertones. So all-in-all if you ask me what genre the book is, I can’t give just one.

What Advice Would You Give Aspiring Writers?
Persevere! If you believe your book is good enough for the world to see it then don’t give up. You will get knocked-back along the way because there are so many books out there but if your book is as good as you think it is, it will stand out from the crowd.

Author Bio:
Born in Yorkshire, England, Daniel spent his formative years with his head buried squarely in a book. His appetite for literature was insatiable; by the time he was a teenager he had read an entire library of books, from ‘the classics’ to popular fiction, but his preferred genre was action and adventure, citing Frederick Forsyth, Ian Fleming and Robert Ludlum amongst his favourite authors.

Daniel now works as a freelance writer and, with the encouragement of his family, has finally found the time to put pen to paper. His first novel, inspired by a business trip to Geneva, where he overheard two technicians from the nearby CERN institute discussing the Hadron Collider, delves into a sinister world where humanity has reached a tipping point of developing technology so profound, that it can destroy the human race.

What Inspired You to Write Your Book?
The book was inspired by a business trip to Geneva, where I overheard two technicians from the nearby CERN institute discussing the Hadron Collider. It was at the time when the Japanese Tsunami struck. The images of the devastation and destruction caused by the tidal wave were everywhere and I thought what if there is something else behind these so called ‘natural disasters?’ What if it’s something we’re doing? Hence the plot.