You are here: Home / Fiction / Fantasy / The Gifted (Vol. 1 of The Daegmon War) by Matthew Dickerson 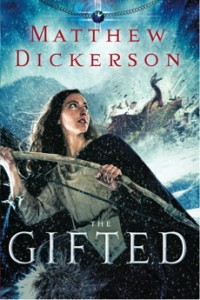 The centuries-old war against the Daegmon Lord has been dormant for generations. Knowledge of the Gifts (powers of healing, of supernatural knowledge, and of strength over demonic foes) has faded into dim folklore.

When one of the Daegmons suddenly returns to wage war against the realm of Gondisle, only one small band, led by a young Westwash woman named Elynna and an Andani hunter-guide named Thimeon, rises up against the terrible foe. But they are few, and only a handful of them number among the Gifted. When the king and the armies of Citadel turn against them, all seems lost for the company and for the peoples of Gondisle.

The Daegmon War is a three-volume fantasy novel beginning with The Gifted, continuing with The Betrayed, and ending with The Mountain.

What Inspired You to Write Your Book?
I began this story with only the opening scene: a handful of characters, a Daegmon-foe rising out of the mountainside itself, and the questions that arose in the first few paragraphs of the contrast and tensions between the gifted and the ungifted.

Everything else was questions. I wanted to explore this land and its history, its landscape and geography, its peoples and cultures, and its creatures. I wanted also to get to know these characters I had just met in the opening scene, and their backgrounds and personalities, and how their relationships would form and shift. Or maybe dissolve. And, of course, i was very curious what would happen and how it would happen.

I will say that I also wanted to offer portraits of heroes and heroism at some level–characters who are not perfect, who are real and flawed, and yet who offer something worth emulating. It is really popular today to portray evil in books and films and other forms of stories. Writers seem to want to make evil appearing attractive and captivating. That’s almost too easy now. I wanted the challenge of portraying something more compelling and virtuous.

How Did You Come up With Your Characters?
I think of it more as getting to know my characters rather than inventing them. I start writing. Somebody appears in the scene. Maybe lots of people suddenly appear. My job is to get to know them: to watch them, and listen to them, and hear what they say, and see what they do. Some of them turn out to be more important and I pay more attention to them. If I throw some drama at them–something that forces them to act or react–then I get to know them better by the decisions they make.

Book Sample
“There,” Thimeon shouted over the noise. He pointed high up the slope to their left. The snow was convulsing. Ground heaved in giant spasms, shaking the valley and sending a half dozen of her companions tumbling backward. The rest of them braced themselves against one another to keep their balance. Still they watched. A huge bulge appeared in the hillside as snow tumbled down around it. The pitch of the rumble had risen to nearly a scream.

“The Daegmon,” Tienna said in a horror-stricken voice. “I feel the ill. The earth groans in agony.”

Elynna could only nod. The heat sense that smote her was like a blast of fire. Only once before she had felt the heat of the Daegmon’s presence this intensely. She had forgotten what it did to her. Thoughts fled her mind, replaced by mere fear.

And it was not finished. With a burst of steam, smoke, and dirt, a dark rent opened up on the snowy slope. All eyes were fixed there now. And when the debris had cleared, they saw it. The Daegmon had begun to appear.

“Illengond protect us,” Thimeon muttered as he stared at the grotesque scene. The foremost part of the Daegmon’s body had already pushed forth from the ground—a cavernous mouth lunging toward the sky with gaping jaws of sword-sharp teeth. Though a mile or more away, Elynna and her companions drew back in fear and disgust.

In an instant, the creature was tossing its head from side to side, shaking its body free from the ground. Above steaming nostrils, large eyes glowed red with hate and power. As its neck shot up from the snow, it released another deafening roar. Then, with a powerful surge, two huge pinions broke free of the mountain, scattering snow and frozen dirt across the slope. The creature’s wings, covered with black leathery scales and spanning forty feet, arched upward as it dragged itself free with its front talons. The rest of the body emerged beneath the wings, and for a moment it stood looking downward. Then, in one fluid motion, it swept its wings backward and launched upward off massive rear legs. As its body took to the air, the rest of its long whiplike tail slid free of the ground, leaving a dark black wound in the mountainside.

While the companions watched, the Daegmon rose high into the air, its shadow blotting out a swath of hillside. It dwarfed them all. Once, twice, then a third time it circled, climbing higher with each loop. It was a display Elynna had seen before. They were all going to die. Unless . . .

In terror, her eyes swept the hillside and the valley below looking for an escape. But there was nothing to be seen. They had been led into a trap, and had followed like spawning fish into a net. The Daegmon flew one more circle. Then, with a final terrifying screech, it folded its wings and swooped downward.

The sound brought an end to Elynna’s paralysis. “Run!” she screamed.