You are here: Home / Fiction / Action & Adventure / The Geronimo Breach by Russell Blake 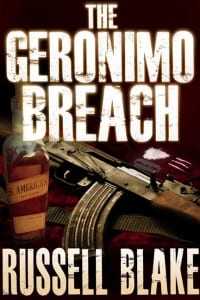 The Geronimo Breach is a breakneck-paced thrill ride that pits the world’s most unlikely protagonist against the deadliest adversaries on the planet. From the corridors of Langley to the sweltering jungles of Panama, from the hills of Pakistan to the cocaine trails of Colombia, a clandestine scheme to preserve a terrible secret goes horribly awry, plunging a reluctant hero down a deadly rabbit hole of deceit and betrayal, while raising disturbing questions about the media, the war on terror & its linkage with the war on drugs, & the nature of reality in an age of sound-bites and photo ops.

Albert Ross is a malingering misanthrope – a boozing, chain smoking philanderer; shifty, lazy, cowardly, going to fat, & more prone to doing the wrong thing than any man alive. His purgatorial existence working for the State Department in Panama gets shattered when a routine errand becomes a race against the clock, battling adversaries for whom no price is too high to protect a secret that could topple the world order. As the body count climbs in a struggle without rules, Al must face his own demons, as well as the myriad very real ones intent upon destroying him. The unexpectedly shattering conclusion of this richly drawn thriller is both topical & chillingly plausible, making for a roller-coaster action/adventure without parallel.

Russell Blake was named one of the most popular indie novelists of 2012 and is the bestselling author of the thrillers Fatal Exchange, The Geronimo Breach, Zero Sum, King of Swords, Night of the Assassin, Revenge of the Assassin, Return of the Assassin, The Delphi Chronicle trilogy, The Voynich Cypher, Silver Justice, JET and JET II – Betrayal. Non-fiction includes the international bestseller An Angel With Fur (animal biography) and How To Sell A Gazillion eBooks In No Time (even if drunk, high or incarcerated), a parody of all things writing-related. Blake lives in Mexico and enjoys his dogs, fishing, boating, tequila and writing, while battling world domination by clowns.