You are here: Home / Fiction / The Former World by Jessica Grace Coleman @jessformerworld 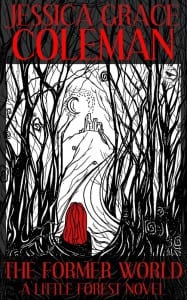 The Former World: Book One in the Little Forest paranormal mystery series.

“Little Forest is the only place I’ve ever lived, and it’s the place where I’m going to die. Tonight.” These are the words of Beth Powers, long-time resident of Little Forest. On the surface, she’s just an ordinary English girl in a typical English village, but appearances can be deceiving… extremely deceiving.

There’s something lurking beneath the picturesque façade of the English village of Little Forest, something dark and disconcerting, something which the vast majority of the residents are refusing to see…

Fed up with living in the tiny, gossip-fuelled village, twenty-one year old Beth resolves to escape to London with her best friend, Veronica Summers. That is, until something throws a spanner in the works. A rather large spanner. A dead body, to be exact. A dead body found early one morning in the spooky surroundings of the Great Specton Woods.

The apparently accidental death of Beth’s work colleague sets off the small community’s well-oiled rumour mill, and Beth soon finds herself in the middle of a bizarre village conspiracy. Potential suspects start appearing in all shapes and sizes – including the handsome new resident, mystery man Connor Maguire, who has conveniently just arrived in Little Forest – and with the police refusing to consider murder, Beth takes it upon herself to investigate. At least it’s a good distraction from the other strange and unusual things that have started happening in her generally boring life; let’s just say that Beth’s work colleague isn’t the only dead person she has to deal with these days. After all, it isn’t always something as innocent as the ghosts of past memories that come to get you…

With the help of rather unlikely ally Will Wolseley, Beth delves into the village’s sinister secrets and, in turn, uncovers a terrifying truth about herself that could change her life forever.

Unfortunately, she might not have much of ‘forever’ left, as when it comes right down to it, it’s not a question of whether or not she’ll decide to leave her childhood home. The question is whether or not Little Forest will let her go.

The Former World is reminiscent of a good old-fashioned English mystery thriller, updated to the twenty-first Century but still relying on the quaint locations of the beautiful English countryside: close-knit villages, local pubs, ancient castles, large, looming forests and magnificent Stately homes. This enchanting rural environment gives Beth the perfect setting to explore the ominous events that threaten to shake up her small village and her life.

How is Writing In Your Genre Different from Others?
My books are paranormal but they have very real, grounded, believable settings, so the fantasy elements grow out of mundane situations. This means I can be both real and fantastical at the same time, and there’s no limit to what could happen (other than the limits of my imagination, of course!)

What Advice Would You Give Aspiring Writers?
This is by no means original advice, but: write, write, write. And when you’re not writing, read! Read everything you can, in all kinds of genres, by all kinds of authors. Read the highly acclaimed and the ones who’ve had rubbish reviews – you can learn various things from all different types of books, whether it be dialogue, sentence structure, grammar, punctuation, etc etc. When writing, try different styles, try different genres, try different points of view and ending a story in several different ways. Get feedback as much as you can, but whatever you do, just keep writing.

Author Bio:
Jessica Grace Coleman was born in Stafford, England and raised in the nearby village of Little Haywood, a quaint English location that would later be remodelled into Beth Powers’ home village in the Little Forest novels.

She studied Film Studies and American Studies at the University of Sussex in Brighton, and attended the University of Colorado at Boulder for a year as part of her course. A big fan of travelling, she has road tripped around North America and backpacked across China, South East Asia, Australia, and New Zealand.

Jessica also runs monthly short story, poetry and flash fiction competitions at Darker Times Fiction (www.darkertimes.co.uk), which focuses on finding new and exciting horror writers. Compilations of these works are now available as the Darker Times Anthology Volumes One, Two and Three and Darker Times Collection Volume One in ebooks and paperbacks, with more Anthologies and Collections planned for the upcoming months.

When not writing about ghouls and ghosts, Jessica edits Rock Pulse (www.rockpulse.co.uk), an online UK music zine, and has had the pleasure of interviewing many bands and artists in the past including The Darkness, InMe, Simple Plan, Bowling for Soup, HIM, Sugarcult, Less Than Jake, Yellowcard, Taking Back Sunday and Funeral for a Friend.

Jessica has so far self-published four books in the Little Forest series: ‘The Former World’, ‘Memento Mori’, ‘The Exalted’ and ‘Carnival Masquerade’. She has also released her first short story collection, ‘Grown By The Wicked Moon’, featuring 14 weird and wonderful tales. ‘The Gloaming’, the fifth installment of the Little Forest series, will be available soon.

You can find out more about Jessica, her available books, and her works in progress at her website: www.jessicagracecoleman.com.

What Inspired You to Write Your Book?
I’ve always loved traditional English murder mysteries (both books and TV/film adaptations), and I wanted to take the genre and add a paranormal twist to it. I’ve based a lot of the locations on my local area, so anyone from the county of Staffordshire will have fun guessing which settings are based on actual towns, cities, and landmarks.