You are here: Home / Fiction / Mystery/Suspense / The Fantasy Book Murders by John Walters 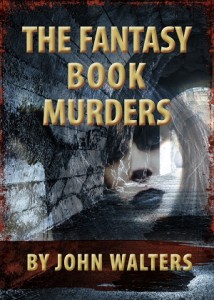 After a famous fantasy writer is murdered in his castle-like mansion, two unlikely investigators discover a pattern of similar murders suggesting a serial killer. They begin to research the killings, starting with the most recent and working backwards into the past. Danger mounts as they uncover the backgrounds of the victims and the truth begins to resemble the fantasy writer’s most bizarre and horrific fiction.

What Inspired You to Write Your Book?
I had written science fiction, fantasy, and mainstream fiction but I had never attempted to write a murder mystery so I thought I would give it a go. The unusual plot, of having all the murders occur one week apart at a specific point in time and the investigators working backwards from the most recent killing came to me as an interesting way to unfold the mystery.

How Did You Come up With Your Characters?
The main character, an enigmatic young woman with a penchant for the noir and macabre, is based on someone I met in Europe long ago. The murdered fantasy writer is a composite of idiosyncratic writers I have heard and read about. Many of the supporting characters are based on people I met during my wanderings around San Diego, where the novel is set, during my early days of my return to the United States after thirty-five years overseas.

Book Sample
Before I tell you who committed the murders and why, I have to tell you about the wizard. You should know him as Theodore Howard Gray. Ah, it rings a bell, doesn’t it? His novels have won Nebula Awards, Hugo Awards, World Fantasy Awards. They have been made into blockbuster films. He has appeared on national and international talk shows in his leather moccasins, dark blue jeans, and brown half-length Moroccan kaftan, with long gray hair and beard, light brown eyes, faint smile, solemn demeanor, deep voice, and slow, measured manner of speaking.
His home, Graymanse, is almost as famous as he is. What began as a typical suburban structure, through the renovations of decades, sprouted multiple rooms, endless passageways and staircases, deep dungeons, lofty bedrooms, turrets, battlements, gargoyles, even a partial moat and a drawbridge.

And now he was dead: victim number seven. His housekeeper found him in his bed, his throat slit from ear to ear, blood soaked into his bedding and into the carpet that had been given to him by fans from Turkey. He appeared to have died around the same time as the others, more or less six o’clock on a Monday morning, or so the papers said.

And I stood outside Graymanse as the last streaks of rose and amber faded from the deep blue twilight sky, with Debby Black, the vampire wannabe, in her flowing black dress with purple hems, her hair dyed jet black, her lips shaded with black lipstick, her nails stained with black polish.

The police had cordoned off Graymanse and its grounds with bright ribbons and warning signs. Debby and I were planning to circumvent any locks and defenses and break in. Investigators, we were, but not for the authorities.

“It looks impregnable,” I said. “And if we cross the lines and get caught we’re in big trouble.”

“Yes. And don’t be sarcastic. I’m a woman of many talents. In a previous incarnation I was a literary groupie, and the wizard was one of my conquests. I’ve been in there before.”

“You never cease to amaze,” I said.

“Admittedly always being full of surprises is one of my charms,” said Debby. Did I neglect to mention that she had purple mascara and a red flush across her cheeks? When she smiled it came across as quite savage.

To the left of the gate, along the stone wall topped with sharp metal spires, to the right as the wall took a ninety-degree turn towards the canyon. We stopped at the canyon’s edge, though the wall continued a few feet farther.

“We don’t go around; we go under. Look. There’s a path a few yards down. It goes under the wall and comes up on the other side. That’s how my friends and I would get in when Teddy wanted us to be clandestine.”

“I’ll go first.” With that, she lightly hopped off the canyon’s edge onto the narrow path, ducked under the wall, and was lost to my sight.

I followed considerably more slowly, lowering myself to the path and painstakingly avoiding the crumbling edge.

On the other side, the path sloped gradually up to the back lawn of Graymanse. By now the light had all but faded, and the silhouette of the building made me think of Castle Dracula. Sconces with dim glowing electric bulbs were spaced around the inside of the stone wall. No lights burned within Graymanse; it was completely dark.

“We’ll have to go in through the basement,” said Debby. “I know a small door under the kitchen.”

Not for the first time I felt gratitude that I had decided to remain sober for this foray. There was enough tension without the added anxiety being stoned brought on.

“Do you think it’s safe to use the lights?”

What the hell? Why worry? I shrugged inwardly and followed her. Under the kitchen porch a steep narrow stairwell led to a thick wooden door.

Debby turned the knob and pushed.

I twisted the knob, pushed with my shoulder once, twice, thrice. On the third shove the door, with a loud shriek of rusty hinges, slowly opened.

Debby said, “Well, that was loud enough to wake the dead.”

Within, it was pitch black. I switched on my flashlight and entered. It was a small storage room with shelves full of canned goods, spare light bulbs, tools, and other odds and ends. At the far end the knob turned and the door opened smoothly.

“What? Did you hear something?”

“No. It’s just that… Before you go in there, remember that Teddy was eccentric. He collected things.”

“What sorts of things?”

The chiaroscuro of stark light and darkness made Debby’s face appear more sinister but at the same time more sensual. It helped me understand why for some people vampires were sexually attractive.

Obviously thinking I was stalling, Debby said, “Do you want me to lead? I know the way.”

“No. I’m fine.” My macho pride piqued, I turned and entered the vast, high-ceilinged room beyond.

And stopped, heart pounding, mindless dread threatening to overwhelm me.

The chamber was full of instruments of torture: the rack, the Judas chair, the brazen bull, the wheel, the pillory, the iron maiden. Other equipment with which I was not familiar, as well as battle axes, spears, swords, maces, crossbows, and other weapons were mounted on the walls.