You are here: Home / Faith and Religion / Christian Fiction / The Falling Away by Cliff Ball 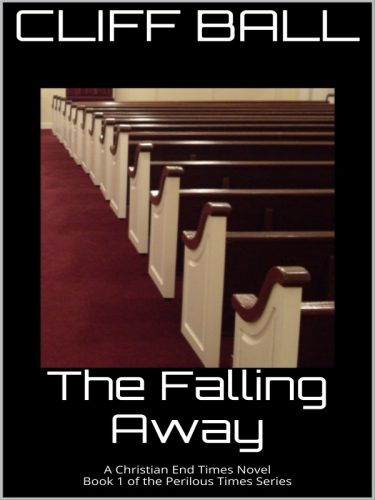 The first book of three in the Christian end times series, Perilous Times.

Doctor Neal Kirkland works at an advanced hospital in the Dallas area. One day, he comes across a patient and his family, the Carson’s, who are Christians, which is rare in this novel’s universe since very few people go to church. After seeing their faith, and they talk to him about Christ, he accepts Christ as his Savior.

Meanwhile, a race war might be bubbling up in the United States and an altered virus spreads across the globe, with the powers-that-be blaming Christians for all of it. Doctor Kirkland finds out the real story behind the virus and decides to do something about it. However, Christians are being hunted down and killed, will Kirkland be able to let the world know what’s really happening?

What Inspired You to Write Your Book?
At the time, I was arrogant enough to think I could write a better end times series than Left Behind.

How Did You Come up With Your Characters?
A couple of the very minor characters at the beginning of the novel are based off of what happened to my parents in 2015. My dad had double bypass (he was 72 at the time) and ended up with a sever case of pneumonia that put him into a coma. My dad ended up at a hospital ICU in the DFW Metroplex where their practice was to let people die if they were that far gone. Thanks to my mom and lots of prayer that didn't happen. So, a fictional version of that is at the start of the novel. As for the main character, I took bits of various personalities I know and infused him with it.

Book Sample
“Okay, now the next item on our list are incoming patients. The first patient is a man named Will Carson, age seventy-five. According to the paperwork, he came down with a severe case of pneumonia after a double bypass and was put on a ventilator because he was getting too weak to breathe on his own. The small-town hospital who had him previously thinks he doesn’t have much longer to live, so they sent him to our ICU. As with other cases like these, we’ll make him as comfortable as we can, but we’ll not go above and beyond. Are we in agreement, Doctor Kirkland?” asked Gina Dodd, the government overseer for this hospital.

Doctor Neal Kirkland spent another moment wishing he had retired when the federal government took over the healthcare system over a decade ago, but he liked the money he made and didn’t want to give it up. He continued to wonder if other government overseers at other hospitals were as cold and black-hearted as Dodd was towards dying patients. From all that he observed, Dodd seemed to enjoy telling families that the government was not going to spend the money to keep their loved ones alive, even if that loved one was the bread winner of the family. It was a shame really, decades ago, a person could survive a quadruple bypass and be none the worse for wear, but now….

“Doctor Kirkland, can you get your head out of the clouds and care to join me and the rest of your staff in this important discussion that we have every single day?”

Neal looked at the obviously irritated Dodd, who was tapping her fingers on the table. He replied, “Sorry, my mind wandered. Uh, we’ll definitely make Mr. Carson as comfortable as we can. I do have a question though, if I may?”
Scowling, Dodd asked, “What is it?”

“I know a man his age rarely ever survives the kind of pneumonia he has, but what-if Mr. Carson pulls through? We’d have to get him a bed in the recovery wing, so does he have the kind of insurance that’ll allow him to stay?”

“Well, if the impossible happens, Mr. Carson is a retired government employee, meaning he has the best insurance in the land. So, we’ll drain his medical account dry until we’re required to release him, simple as that,”

“I see. Are you going to talk with the family about accepting Mr. Carson’s eventual death?”

“Of course. Let me see what their religious preferences are and I’ll talk to them about preparing for his death.” Dodd shuffled through the paperwork and found what she needed. “Ah, here it is. According to the previous hospital, his wife practically spent twenty-four hours a day by her husband’s side, watching his vitals like a hawk. Well, she won’t be able to spend the night here, so she won’t interfere nearly as much. Anyway, they’re Christians, apparently from a much stricter denomination than most we encounter. I’ll tell them I’m a chaplain and if they need me, I’ll be around, even though I won’t be,”

“Don’t you think they’ll see through that? Do you even know if they accept women chaplains?”

“Honestly, I don’t care. Just do your job, Doctor, and the same goes for you nurses. Go it?” The nurses around the conference table acknowledged the order.