You are here: Home / Autobiographies, Biographies & Memoirs / The Factory by Greg Dragon 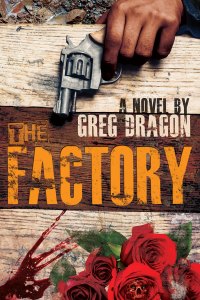 In Brian Jackson’s eyes, he was being cheated out of a proper life. His boss paid him a salary comparable to the people that he managed, while he lived in a crappy apartment, and his only connection with women was limited to his weekly visits to his favorite strip club. Brian had done everything right by society, but the rewards were just not enough. This was until he met Jada, a beautiful stripper who grew attached to him. When Brian took their relationship outside of the club, he didn’t realize that it would be his first step into a life of murder, infidelity, and organized crime.

What Inspired You to Write Your Book?
I’ve been reading books and watching movies on organized crime for as long as I can remember. One of the things that I have always wanted to do was to write a book about a syndicated group of thugs but I didn’t want to do historical fiction. The Factory gave me a chance to start from scratch with a wise guy from a fiction standpoint.

How Did You Come up With Your Characters?
The are heavily influenced by the knuckleheads I grew up with, and with a little sprinkling of myself in there. I’ve known some characters (boy, have I known some characters), and so it didn’t take a lot of imagination to recreate satirical versions of them in The Factory.

Book Sample
I looked down at the decals and frowned as they were not quite up to standard. Frustration took me over as I thought about the meeting coming up, but then when I looked over and saw the short-cropped brown hair that stood miles above the slender shoulders of Megan, the only thing that I could think about was running up those miles in slow motion with my tongue. These will have to do, I thought, as it was now closing in on midnight, and I wanted to leave. The girl was not qualified for the job. She wasn’t the best artist, did not have the steady hands needed to cut vinyl, and she lacked confidence. What she was, however, was the owner’s type. She was short, slim, not too voluptuous, and laughed with much gusto whenever you gave her the time of day. As her manager, I felt as if I was stuck with a blunt instrument, trying to use it to chop wood, and I wasn’t allowed to throw it away and get a sharper one. But I liked Megan; she was a pretty cool chick, and she was actually bright—beneath the giggly exterior that she presented to the world—and I think she knew that I knew this about her.