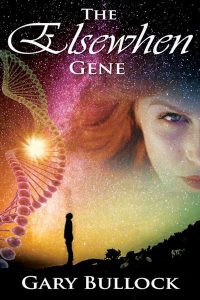 The Elsewhen Gene by Gary Bullock

Laura Elizabeth Austin grows up in a small farming town in Kansas. Already a genius at age eight, she and equally bright Elijah Lucas Grant are very different from other kids, but Laura and Elijah have each other.

Fascinated with science, they seriously discuss the big cosmological questions – the nature of time, black holes, the origin and the destiny of the universe, so the two little prodigies become soul-mates, at the tender age of 8.

At the age of 12, on a bicycle ride together, they have their first kiss while debating the nature of time. (Laura claims it doesn’t exist. She may be right.)

They are also troubled by strange visions. Laura sees people who aren’t there. She thinks they are ghosts, but comes to realize that they exist in another universe, and think that she is a ghost. She discovers that she can actually step into an alternate universe, which leads her to believe that this ability is embedded somewhere in her DNA.

Elijah sees flashes of events that haven’t happened – yet. But he learns to develop this into an unerring sense of the future. As the Red Queen says, “It’s a poor memory that only works backwards.”

To put it simply, Elijah sees time forward and back; Laura from side to side.

They soon learn the future isn’t what it used to be. Neither is the past. But in the eternal present, they have each other, for now.

Together they embark upon an adventure across multiple universes and alternate lives, saving themselves from a stampeding buffalo herd, a sadistic security agent, and a cosmic Apocalypse.

Also, while working for their PhD’s at the prestigious MIT, they help to reunite a World War 2 fighter pilot, stranded in the wrong universe, with the love of his life, who is trapped in another. All in a day’s work.

What Inspired You to Write Your Book?
I wanted to see a story about two young geniuses who fall in love and have an amazing adventure. Since I love science fiction as well, I gave them parallel universes to travel through, and wrote it myself.

How Did You Come up With Your Characters?
Both Laura Bess Austin and Elijah Lucas Grant are country kids, raised on farms in the mythic American midwest. I gave Laura her name because of its romantic associations, as in the old movie "Laura." Elijah is named for an Old Testament prophet, and I liked the old-fashioned sound of it. I purposely gave him the nickname "Lije", instead of the usual "Eli", in honor of one of Isaac Asimov's heroes, Lije Baley, in his Robot series of novels.

Book Sample
As the two approached their favorite hill, they let go hands in order to pick up speed, pedaling madly to reach the crest. At the top they stopped and looked at each other, then at the smaller hill ahead of them on the endlessly rolling prairie road.
“Ready to soar?” Lije said.
“Roger that!” Laura yelled, “T minus 3, 2, 1, 0! Ignition!”
They both stomped down on their pedals, hunched over their handlebars, and shot down the hill. As they approached the bottom, they reached out and joined hands again. Hitting top speed, they soared up the mogul, their bikes levitated, and for a second or two, at the top of the parabola, they were birds, they were astronauts, they were gloriously free of the surly bonds of earth.
“Liftoff!” They both shrilled, laughing wildly, hands still touching.

The bison calf squalled and hid behind the very large bulk of its mother, as two strange creatures appeared from nowhere and sprawled onto the prairie grass on spindly metal ponies, narrowly missing the little fellow. They lay there a moment, stunned.
Laura started to giggle. “Ow! That hurt, I think.”
“How did we miss the pavement entirely?” Lije said, spitting out bits of dirt and grass.
The alarmed mother bison huffed, her wide eyes staring. Several hundred other bison paused in their grazing, looked up, and considered the two very odd beings who had just arrived in their midst.
As their giggling subsided, the two young astronauts slowly became aware of the strangeness of their surroundings. They weren’t alone, and they weren’t in Kansas anymore. At least, not in the Kansas they knew.
“Don’t move, Laura Bess.” Lije whispered.
“Uh, what choice do we have? We can’t exactly shoo them away.”
For a moment, no one, and more importantly, no bison stirred. A long silent stalemate ensued. Then one of the behemoths—the boss bison—strolled over and decided to investigate. Looming over them, it shook its huge shaggy head, snuffled both Laura and Lije thoroughly, gave a perfunctory lick on Lije’s face with its big black tongue, and strolled away, apparently unconcerned.
Laura Bess let out a long held breath, as the herd slowly wandered away, heads bent back to their task of cropping prairie grass. Before long they disappeared over a rise and were out of sight.
“Well,” she said, “That was interesting.”
“I can think of lots of words for what just happened. ‘interesting’ isn’t one of them.” Lije said, as he stood up and tried to get his bearings, without success. “But here is a question or two: Where is the dang highway? Where the heck did these buffalo come from? Oh, and last but not least, where are we?”
“You think I know?” she said, studying the ground for nothing in particular.
“I didn’t a second ago, but the way you seem absorbed in the dirt makes me think maybe you do. Laura Bess, what is going on?”
Laura Bess looked up and slowly scanned the horizon. She pointed to a hill off to the north. “The highway is over there–or will be. The buffalo live here–or did. And where are we? It’s a place I call an ‘Elsewhen’, and it’s probably anywhere from two hundred to a thousand years ago in our world, from the looks of things, but not far from home.”
“Elsewhen?”
“Yup.”
“I didn’t really expect you to have an answer,” Lije said, “But this is a doozy.”
“Well, I didn’t plan this, Lije. Sometimes it just happens.”
“It? What is this ‘it’ that ‘just happens’?”
Laura sighed. “I did plan to explain all this to you someday, but I guess I gotta now.”
“The sun is going down, Laura Bess. I hope you’re going to tell me there’s a way out of here, wherever here is. We could be wolf dinner if it gets dark.”
“If I’m right, this shouldn’t last much longer, but I think we’d better be touching. I was always alone before.”
Lije stared at her. “What?”
“Hold my hand! You didn’t mind a little while ago!”
“Ooo-kay. Think we ought to, you know, maybe… kiss, too?”
She looked at him, one eyebrow cocked. “Couldn’t hurt,” she said.
They locked hands, and leaned toward each other. As their lips almost touched, but not quite, a slash of lightning struck, and a deafening thunder broke the silence. Then another low rumble started, growing louder rapidly, as the hooves of hundreds of startled bison beat the prairie into dust.
“Oh Lord!” Lije said, “They’re heading back this way!”
“Grab your bike and run to the highway!” Laura Bess shouted.
“What highway?”
“Where it will be. Over there! Just down the hill we rode!”

Lije and Laura Bess ran as hard as they could, but the vanguard of the bison herd appeared behind them over a not-too-distant rise.
“Laura Bess! We can’t outrun them. Let’s just be together when they run us over.”
She stopped, looked back to the approaching herd, then back to Lije, dropped her bike, and threw her arms around him. “Hold me tight, Lije. I—“

“—love you,” she said, her words drowned out by the roar of a sixteen-wheeler semi narrowly missing them as the two young soul mates stood by the side of the road, locked in each other’s arms. As its parting blessing, the truck’s back draft whipped Laura’s long flaxen tresses around both their faces.
“What?” Lije spluttered, her hair in his mouth.
“I said—” she shouted, but the truck noise was fading, and she hesitated. “Wait—did you say you wanted to die with me?” she added quietly.
“Not exactly. I don’t want you to die at all, but if you do, I want to die with you.”
“Elijah Grant. Do you love me or what?”
“Yeah. I thought you knew that.”
“I’ve known it since we were little. I didn’t know if you knew.”
“Pretty much.”
“Well. That settles that. We’d better get home before our parents think we’re dead or something.”
“Yeah.”
Then they picked up their bikes, dusted themselves off, and headed for home.

They pedaled along for awhile down the old two-lane highway. Laura sat up and rode no hands, her arms stretched out like wings, her hair flying. Lije rode slightly back, watching her, mesmerized. He finally broke the silence.
“Think we’ll get married?”
“I think it’s a definite positive probability.”
“Me too. But we’ve got to talk about whatever it was that just happened.”
“You mean the buffalo and all? Yes. Later.”
“Laura Bess, I thought you believed that time doesn’t exist.”
“True.”
Lije pondered, as the silence resumed.
“Well,” Lije finally said, “Then why did you explain—no, not explain—imply that we were time-travelers, and somehow landed in the time of the buffalo, ‘two hundred to a thousand years ago’?”
Another silence. Only the zizz and click of the bicycle chains going round and round. Then Laura suddenly scritched to a stop. Lije did a one-eighty on his bike to face hers, stopped, folded his arms and waited.
“It’s easier to explain what happened in terms of time, because that’s how most people see it. I’m sorry, Lije. We just didn’t have the opportunity for a long discussion, what with the buffalo herd almost tromping us into the ground.”
“So what happened back there?”
“We stepped aside. Anyway, that’s how I like to see it.”
“From where to where?”
“Here to here, actually.”
“You mean we didn’t go back in time?”
“Clearly, since time doesn’t exist. Those buffalo live in an alternate version of our world—one which the white man hasn’t messed up yet. We were never far from home, at least in distance.”
“Whoa. And you know this how?”
“Been there. Done it.”
“Laura Bess.”
She screwed up her face in a reluctant pout. “Aw heck Lije—I wanted to wait till we were older before I told you all this stuff.”
“Come on, Laura Bess. You’re starting to sound like my mom trying not to explain about, you know, sex!”
Laura looked down and dawdled with her bike for a moment. Then she blurted out everything, in one continuous burst.
“IcanstepasideintoalternaterealitiesandI’vebeenabletosinceIwasfiveyearsoldIlove youandI’msorryIdidn’ttellyousooner. Doyoustillloveme?”
Lije looked at her for a moment, absorbed.
“Yep,” he finally said, nodding, “But you still have some ‘splaining to do.”