You are here: Home / Children and Young Adult Books / The Dream Catchers: PRESTORIA Series Book 1 by J. U. Menon 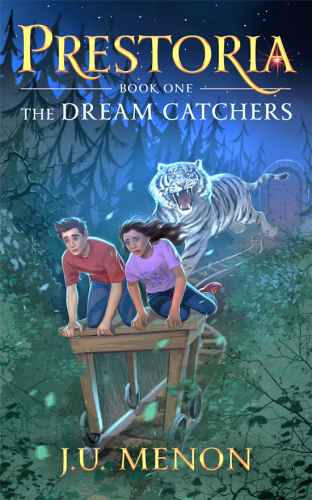 Mr. Winters grinned. “That is an excellent question! Look around you. You are in the land of … PRESTORIA!”
He waved his hands dramatically. The darkness dissipated in an instant as though a dark curtain had been pulled down.
—————————————-
RADHIKA VARMA has an overactive imagination – everyone says so. But when she is chosen to participate in a Challenge held in Prestoria – the mysterious realm of nightmares, she must use every bit of wild imagination she possesses to fight for her life. As one of eleven Dream Catchers and armed only with her imagination, Radhika must conjure her own weaponry against powerful ancient creatures like the Vyalas and the Rakshasas, and get to the magical portal before dawn. Fail to do so, and she will be forced to stay behind in Prestoria forever.
But when everyone starts suspecting her of attacking the other Dream Catchers, Radhika realizes that there’s more going on than meets the eye. With mere minutes left until dawn, will Radhika manage to complete the Challenge and get back home, or will a thirst for vengeance lead to Prestoria claiming her as its own?

What Inspired You to Write Your Book?
The idea for the book came to me in a dream. I remember getting up at 2 or 3 in the morning, itching to get to a pen and paper so I can jot down the idea. It took me several more years to complete this book, but it all started with that one dream.

How Did You Come up With Your Characters?
The characters came fully formed to me as I was writing.