You are here: Home / Bargains and Freebies / Bargain Books Under $3 / The Doomed World of Milagro by Simon Finchley 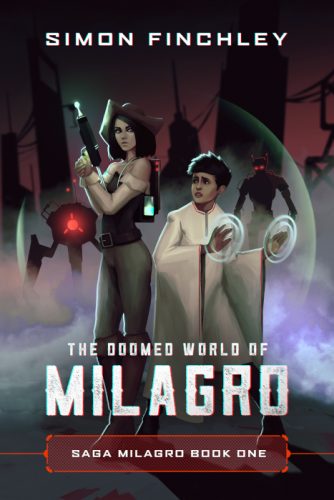 A pirate struggling to make a change. A ghosthand with something to prove. And an ancient magic that binds their fates.
Juliana wants to do the right thing for her rusty mechanical crew, but her past keeps dragging her back to piracy. When she discovers the merfolk have a powerful magical weapon, she makes a plan to shift the balance of power on the sea forever.
Meanwhile, Otte wants to find a place in their sleepy farming town, but despite their magical skills, they don’t belong. When a vampire attack reveals a hidden secret, Otte seizes the chance to make their mark.
Both in search of an ancient magical artifact, these two paths cross, and they are both faced with a choice: trust each other, or lose everything. But does the artifact hold the solution to their problems? Or is it more dangerous than anyone could imagine?
The Doomed World of Milagro is the first book in the science fantasy series Saga Milagro. If you’re looking for swashbuckling adventure, a world full of mystery, and compelling female and non-binary main characters, you’ll find it all in this brand-new novel by Simon Finchley.

What Inspired You to Write Your Book?
I wanted to create a world that was engaging and mysterious, a world that readers would want to visit again and again. I wanted to write a book with both science fiction and fantasy elements.

How Did You Come up With Your Characters?
All of my characters are a mix of people I know. I also have been an actor for many years, and was able to draw on that experience to put myself in the position of my characters and write from that perspective.

Book Sample
The shovel handle snapped.
“Basura!” swore Juliana, as she flung the pieces onto the pile of broken shovels.
She looked up, hand to brow, at the thin crescent of sun overhead. They would lose daylight soon. She pulled a red bandana from her leather boot and wiped her face. Her tan skin was thick with dirt and sand, her short black hair matted with sweat. She spat on the ground, her lungs raw.
All up and down the beach, her crew of mechanicals and imps dug holes. A mechanical with shovels for arms tossed sand from a waist-deep pit. Another mechanical, basically a wheelbarrow with legs, dumped a load of sand and dirt and lumbered back to the array of holes. Even the imps, with their bloated black bodies and tiny, stick-thin limbs, moved spoonfuls of soil in between bouts of trying to bite each other on the legs.
She had thought this would be a sure score. Juliana had convinced the crew to delay their payment, she was so sure. But after an entire day of work and an island full of holes, not a single coin had shown its golden face.