You are here: Home / Fiction / Fantasy / The Dissension Process by Markus James 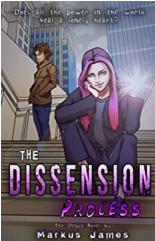 Jamie is a lonely teen with an extraordinary ability, a trait shared by a small number of the city’s population. Hoping to escape her mundane life, she uses her powers to seek out and combat any malevolent empowered individual she can find, to little avail.

Then she encounters Jesse, a mysterious boy bearing a similar ability who promptly flees. Fascinated and obsessed, Jamie tries to track him down once more. However, she soon learns of the dangers that come with using her powers out in the open and the unwanted interest they bring.

What Inspired You to Write Your Book?
I was inspired by a love of fantasy and sci-fi fiction, both books and television shows but I also wanted the main focus to be on a tale of coming of age. Additionally I wanted to include aspects of social issues and the teenage experience that people could relate to such as love, a yearning for friends, growing up in poverty and coping with depression as well as some more serious topics such as harassment towards women and misogyny.

How Did You Come up With Your Characters?
My main character, Jamie, is a tomboyish teenage girl who was designed to defy gender norms – she dresses in a masculine manner and comes across as brash and reckless but also shows a high degree of intelligence and tactical awareness in her super-powered bouts and harbours a lot of vulnerability due to her rough past. By contrast, her later friend and love interest, Jesse, is calm and reserved, bearing a lot of trauma himself but choosing to approach life with a more level head than one of anger like Jamie. I essentially wanted a pair of polar-opposite characters that could interact with each other despite their differences but also feature a working love angle between them that keeps the audience guessing.

Book Sample
Jamie stood poised, caught between anticipation and fear. Despite succeeding half a dozen times before, the situation always brought a tense feeling that something could go badly wrong.
But opportunities like this didn’t come by every day.
Ignoring any further cautious thoughts, she swung her arm in the usual backhanded scything motion, launching a fast-paced wave of kinetic energy. She heard the crack of bone breaking as the wave connected square with her target’s arm, knocking him down to the concrete floor. Easy part over.
Jamie rushed over to the downed miscreant on his knees as he slowly attempted to rise, clutching his broken limb while groaning in agony. Before he had a chance to see her approach, she had grabbed the back of his neck with her open hand and hoped to feel the usual surge flowing into her.
Nothing…
The youth then began to thrash about, attempting to swing his remaining uninjured arm into his assailant only for it to be caught with their other free hand. Suddenly, Jamie felt the flow of her opponent’s power entering her body through her left hand still grasping his neck, a torrent of energy flooding throughout her torso and limbs, indicating the activation of his ability and allowing hers to take effect. She hung on until she had felt she had drained enough of a substantial amount before crassly booting her ‘donor’ to the ground.
Her foe neutralised, she took a moment to attempt to use the newly-gained ability. Within seconds, a small flame manifested within her palm, heat emanating from it though surprisingly not enough to cause a burning sensation. Satisfied, she turned to leave.
She then suddenly felt a forceful blow to the square of her back that knocked her down to the pavement herself, feeling a searing pain in her right forearm as she skidded upon the concrete. Taking no time to inspect the damage, she turned around to see the still-injured youth about to aim his unimpaired hand towards her.
He then hesitated as he got a closer look at his attacker underneath the hoodie covering their head – seemingly a girl and not a guy as he assumed based on the clothing. Taking advantage, Jamie rolled backwards onto her feet and launched another kinetic wave, catching her opponent in the chest as he was knocked backwards at least two metres, landing hard on the floor once more.
She stood over her fallen opponent as he struggled to catch his breath, winded and barely able to deal with the pain coming from his broken arm. She then looked to her own arm, her jacket sleeve very visibly torn with a raw gash underneath.
Great…