You are here: Home / Children and Young Adult Books / The Diary Of Aaliyah Anderson by Randall Barnes @authorrandallb 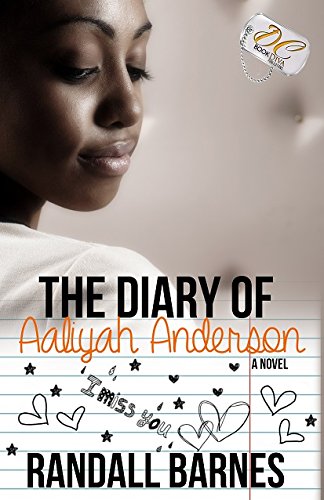 Meet Aaliyah Anderson, a beautiful, intelligent, ambitious thirteen-year-old young woman ready to take over the world. With her mom being a superstar broadcast journalist and her older brother Damon being an acclaimed writer and star sports player. Aaliyah lives a fantastic life. Aaliyah quickly learns that her good life, doesn’t separate her from life’s problems. She has to deal with tons of hardships and avoid many obstacles along her path to achieving her short term goal of finally making it to high school and what she feels will bring her closer to her dreams of being a CEO of a company.

Aaliyah has to deal with overwhelming family issues such as the divorce of her parents and the result of her “father’s” unfaithfulness, infidelity, and a family secret that turns her world upside down. As if her family wasn’t messed up enough, her eleven-year old brother turns to the streets and joins the Eastside Rydahz, one of the most notorious gangs in the city. Her eldest brother Jeffery, or high-ranked Rydah 808, hates everything about Aaliyah and she doesn’t understand it. All Aaliyah wants is to have the ideal loving, united family and it hurts her that their situation is seemingly fractured beyond repair.
To make things even more pressing, she lives in the ruthless city of Willowsfield, statistically the #1 most dangerous city in America, where senseless community violence is the norm and life expectancy is low. With the pressure to succeed and make it out of the ditch that Aaliyah calls her hometown, she still has to deal with more problems that test her patience.

With its realistic characters, life-like setting and dynamic message, The Diary of Aaliyah Anderson is entertaining and a sure fire conversation starter on what we need to do as a generation.

What Inspired You to Write Your Book?
I wrote “The Diary Of Aaliyah Anderson” because I haven’t seen any novels that accurately cover the struggles and triumphs of millennials in American society. As a 17-year old author, I try my best to transfer my experiences on the proverbial pages of a novel. Being a young man striving for success in an environment that encourages negativity and conformity is hard. I chronicle this journey through the voice of Aaliyah Anderson, a thirteen year old young woman that is as ambitious and rebellious to negative influences as me.

How Did You Come up With Your Characters?
The people around me inspired the creation of my characters. Because of the fact that I’m in high school, I come across some interesting characters every day. I use their unique personalities and make them characters in my book. It helps with relating to all members of my intended audience, no matter where they live or what economic or ethnic background they might come from.

Book Sample
Another thing ‘Kiyah does is run her mouth too much. It’s cool to be confident and not back down from anything but don’t talk yourself into drama! Jakiyah has three high school girls wanting to fight her.
“Are you serious?” I asked her when she first told me. We were in the hallway during the 1st to 2nd period class change. Jakiyah is in cluster 8-2, which means I only get to see her only a few times throughout the day.

When Allison saw ‘Kiyah coming, she immediately went over to talk to Latasha and her cheerleading crew. Allison and ‘Kiyah don’t talk all that much. Allison will speak to her since she’s a mutual friend of mine but she doesn’t like how she acts. When I told her the whole story over the basketball tournament and where the idea came from, that definitely made Allison wanna avoid ‘Kiyah. She’s really similar to me.

“Yeah girl, but you already know how it is. Any of them can catch a one!” she told me, getting more and more angry every second she thought about it.

The whole situation is crazy. It all started over a mistimed, misplaced Facebook comment. There was a fight video that was posted in late July with two of the high school girls that wanna fight ‘Kiyah were fighting each other over a boy. The boy wasn’t even worth fighting over either. He’s a fat drug dealer that’s like seventeen with a receding hairline.

The only way I’d fight over a guy is if we’re really close. As of right now, the only guy I’ll fight anybody over is D. I don’t even fight anymore though. Back when I lived in Riverstone Creek, I was hell on these fake females! They’d wind up in the hospital messing with me!

Nowadays, I like to keep it classy. But, even if I was like I was back a couple of years ago, I definitely wouldn’t fight over an ugly, brain-dead, high school dropout. You wouldn’t even catch me with a guy like that. I have places to go with my life and being with someone who doesn’t share my ambition will only hold me back. None of these girls think like me though. If they did, this whole drama wouldn’t even have happened.

Anyway, ‘Kiyah got on her Facebook page, went to the video and commented:

Forty-five minutes later, the video comments turned into a major war of words. ‘Kiyah got into arguments with both girls that were fighting with each other and Dominique. Now, those two girls and Dominique’s younger sister want to fight ‘Kiyah.

It seems like Facebook is starting to slowly become MySpace 2.0. It started off cool, then you let ratchet people get a profile and things go crazy! You got people getting killed over Facebook drama now! I have a profile too but I barely get on. The only time you’ll see me logged on Facebook is when I’m posting some pictures or wishing someone a happy birthday. I barely accept my friend requests. It’s just too much drama!
Speaking of friend requests, why would you be friends on Facebook with someone you don’t like in real life? That’s asking for trouble. On Facebook, I’m not friends with Latasha or any of the people she hangs around, minus Allison. We have problems in person, why would that change on the internet?

People try and say the reason they friend people they don’t like on Facebook to see what they’re doing and if they’re talking about them. I guess they don’t realize how nosey and paranoid that makes them look? People take Facebook way too serious and I’m just being real.
♠♠♠♠

About the Author:
Randall Barnes is a seventeen year old author, internet radio personality, public  speaker and mentor who currently resides in Macon, GA. Randall is already renowned  for his positive, realistic, moral driven writings. His first novel, “The Diary of Aaliyah  Anderson” has garnered over 40,000 reads on Wattpad.com and universal acclaim. He  writes for the popular news website Urban Intellectuals, the relationship blog Courting  Her and the literary blog Straight, No Chaser. Randall is currently a senior at William S. Hutchings College & Career Academy.  Along with being a talented writer, Randall also has the gift of public speaking. He won  first place in the FBLA Region 5 Public Speaking Competition in January of 2013. Randall also was the first student in history to represent Hutchings in the Rotary Club  Speech Contest. The best has yet to come for this young man. Look out!