You are here: Home / Fiction / Paranormal / The Demons of Liberty Row (A Boston Metaphysical Society Story) by Madeleine Holly-Rosing @mhollyrosing 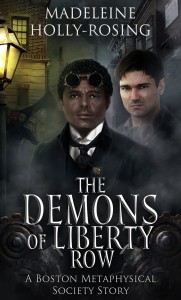 Demon hunting has become a lot more difficult for Samuel Hunter and his Medium and Spirit Photographer, Andrew O’Sullivan. Severely injured in his last encounter, Samuel is forced to seek out the assistance of an African-American scientist and engineer by the name of Granville Woods. Suspicious of Samuel and his motives, and with his own secrets to keep, Granville refuses to help. But a demon has come to prey on Granville’s neighborhood of Liberty Row and a close brush with death makes Granville realize he needs Samuel and Andrew’s help after all.

Based on the popular steampunk webcomic BOSTON METAPHYSICAL SOCIETY.

What Inspired You to Write Your Book?
I’ve been developing the world of Boston Metaphysical Society for quite a while now, but I hadn’t told the story of how Samuel and Granville first met. This story gave me the opportunity to explore Granville’s POV for the first time and I really enjoyed it.

How Did You Come up With Your Characters?
Many of the characters in the comic and the novellas are historical while others are completely fictional. To develop the fictional characters I look at the history and the social and economic issues of the world and pull the out the characters that would have the most conflict.

Book Sample
“Take us to the demon,” Samuel Hunter ordered, as if he was addressing a slightly dimwitted servant.

The girl, barely ten years of age, chirped at him in a short, hysterical laugh. “You can’t find him unless he wants you to.”

“That’s why I be here, lassie,” Andrew O’Sullivan reached out to comfort her, but the girl shied away from the Irishman, wrapping her torn light wool frock tightly against her chest. “We be here to kill it.”

The girl stared at Andrew as if he had lost his mind. “It can’t die,” she said softly.

Samuel chuckled. “Who said that?”

Without another word, she turned and disappeared into the forest.

About the Author:
A TV, feature film and comic book writer, Madeleine is the winner of the Sloan Fellowship for screenwriting, and the Gold Aurora and Bronze Telly for a PSA produced by Women In Film. She also won numerous awards while completing the UCLA MFA Program in Screenwriting. Formerly a nationally ranked epee fencer, she has competed nationally and internationally and an is an avid reader of science fiction, fantasy and historical military fiction. Madeleine lives in Los Angeles with her rocket scientist husband.

BOSTON METAPHYSICAL SOCIETY webcomic is the recipient of an HONORABLE MENTION at the 2013 GEEKIE AWARDS and has also been nominated for a 2012 Airship Award as well as a 2013 and a 2014 Steampunk Chronicle Reader’s Choice Award. Her novella, STEAMPUNK RAT, was also nominated for a 2013 Steampunk Chronicle Reader’s Choice Award.

She currently has novelettes and a novella for Kindle based on her webcomic BOSTON METAPHYSICAL SOCIETY. Her goal is to eventually develop a series of novels based in this world.

Special editions of the the first, second and third chapters (over 30+ pages) are available for purchase digitally. A 24 page edition of chapters 1, 2 and 3 are available in print through the BMS website.