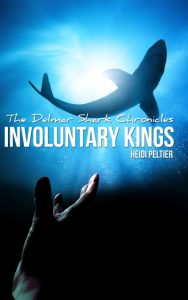 Two men named Merrick Delmar, separated by more than one thousand years. One was the very first king of Isola di Squalo; the other will be the next. Their lives are so different yet very much the same. Each struggles with the position of authority into which he has been thrust. Neither feels qualified, and neither knows where to go for help. What does it take to be a good King? Can one man do it alone? Through struggle and storm, each will make a journey of self-discovery to assess whether he truly can rule, involuntarily or not.

Sometimes the calm in the eye of the storm comes from within.

The third installment of the Delmar Shark Chronicles follows young Prince Merrick Delmar on a journey of self-discovery.

What Inspired You to Write Your Book?
After I wrote the first book in the series, one of my readers speculated what the children of my main characters would be like. How would the sharks affect them, and how would they affect the sharks? I thought about it for a while and considered how very different my own two sons are. So I decided each son needed his own story. This one is Merrick's. Merrick, being the oldest, is next in line to be King, and I imagined what it must feel like to have no choice in the matter. He was named after the first King of their island, and he hated the man for getting his family into this mess in the first place. But he knows that regardless of how he feels, this is his destiny. So I wondered if it was possible for him to make peace with his future. Viola – the story was born.

How Did You Come up With Your Characters?
Merrick is based loosely on my older son, Ethan, who is very sensitive to everything that goes on around him as well as being very timid when something seems daunting. Dezirae is based almost entirely on my niece Desney. She's athletic, smart, and goal-oriented. Just the kind of personality needed to balance Merrick's insecurities. Dez's brother, Dash, (I'm not going to lie) is based very much off the character Sanka in the movie "Cool Runnings."