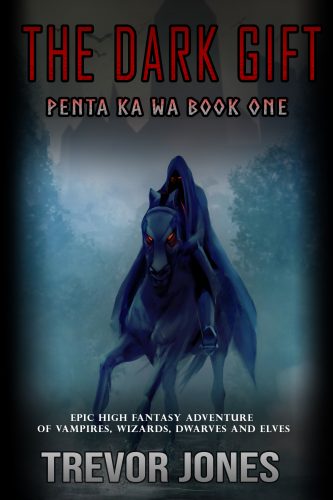 Penta Ka Wa: The Dark Gift illustrates the fantasy world of Kinthur with vivid colors & textures. There is a wide range of rich and diverse characters that fill the pages and the odd circumstances that put them together.
A king whose court is the bedrock of corruption, filled with noblemen and women who are either plotting to gain more power or are fighting to keep it. A rich and mysterious merchant suddenly appears in the kingdom and disrupts the current seat of power.
Wizards of the arcane arts, a group of adventurers who seek revenge, a forbidden love that must be kept secret,
a vigilante who only kills those with the blackest hearts, elves, gnomes, dwarfs, clerics, a lich, necromancers, and an approaching army setting events in motion and causing some plans to fall awry.

It also asks tough questions and allows the story to try to find the answer.
Can a good and honorable man, who has lived a good and simple life, keep his soul after witnessing a maddening tragedy that literally ended his old life and forced him to start a new one?
Can he hold on to the pieces of who he once was when The Dark Gift takes over and forces him to experience unimaginable horrors? Or will his newfound powers consume him completely like the bloodlust that gnaws at him to perform dark deeds just so he can feel like his old self for a brief moment?
And what will become of him if the King, the Royal Mage, or anyone under his employ come to learn his secret?

What Inspired You to Write Your Book?
This book started as an oral story told to the players in my game world of Kinthur. After a few years, the story got so long I would leave out parts, angering my veteran players. So finally I put pen to paper and discovered I had the beginnings of a novel. Over two dozen stories were sitting around and this one still was my favorite. Finally, I made it my mission to complete this one and turn it into a true book. It was another two years before the book was published.

How Did You Come up With Your Characters?
The stories and characters are all inspired from actual game play and the adventures that we create together. Kinthur has been a thriving world since my college days in 1991. The protagonist in The Dark Gift was inspired by a discussion of the differences in people's point of view regarding immortality.

Book Sample
The next town Penta stopped at was on the very edge of the kingdom. It was a military outpost that was home to over six hundred soldiers, and among them was the King’s personal executioner and torturer, Jaxus Talon of the Raptor Clan. The man was a barbarian and a sadist; his cruelty was the stuff of nightmares. The King used him to get information from prisoners, or simply to punish those he felt had slighted him in some way. Jaxus didn't care who or why he was hurting someone, only that the king let him have plenty of victims. Penta felt that of all the people he had to kill in order to survive and those he killed out of necessity, this man deserved death more than any other. Jaxus was a big man, but he was caught unprepared and defenseless, much like his own victims. When Penta finished, he returned to his estate. He had lingered too long and daylight was lighting the sky over the house. His skin was smoking by the time he put his hand on the window sill. He had left it open as a way in without being seen by the rest of the staff. Once safely inside his bed chambers, he quickly healed the damage. Penta sat on the seldom used master bed and removed his smoldering shirt. Though he did not need air, he took a deep breath to try to release some tension. A knock at the door was unnecessary, as Penta could already make out the sounds of the twin's heartbeats.
“Come in.” He said.
The brothers came in to see their master sitting upon the huge chamber bed, shirtless. Penta cradled his head in his hands, weariness washing over him. The magical connection between the vampire and his servants allowed them to feel an echo of what was raging within him. Kastor and Pollux looked to each other, worry mirrored on their faces. Kastor spoke first.
“Master? 'Tis close to dawn, was your mission a success?”
Penta let out the closest thing to a laugh he'd expressed in the decades since becoming a vampire.
“The irony, my friends, is that it was a great success. When I became, what it is that I am, I denied my nature. When my nature took control of me I tempered my need to take life by only taking those I thought deserving of death. The result is that every soul that I have ushered to the other side has passed through me. The taint of these victims has not left me unaffected. I fear I am standing upon the fulcrum on which the forces of good and evil balance.” Penta took another deep breath as if trying to purge the darkness within. Shaking his head in defeat he lifted the bed with one hand and climbed into his makeshift tomb to rest for the day.