You are here: Home / Fiction / Historical / The Coming Woman by Karen J. Hicks 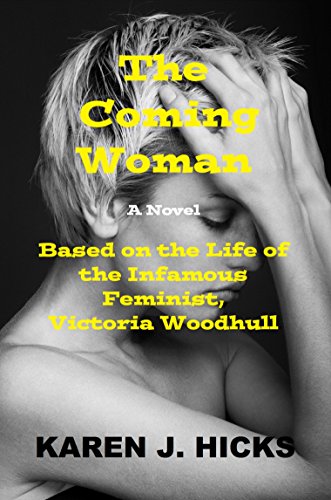 At a time when Hillary Clinton is considering another run for the presidency, it might be helpful to consider the first woman who ran for president—and at a time when women were prohibited from voting!

The Coming Woman is a novel based on the life of feminist Victoria Woodhull, the first woman to run for U.S. President, 50 years before women could even vote!

She was the first woman to enter the Senate Judiciary Committee chambers to petition for woman’s suffrage, her argument changing the entire focus of the suffragist movement by pointing out that the 14th and 15th Amendments already gave women the vote.

In her campaign for the Presidency, Victoria Woodhull boldly addressed many of the issues we still face today: equal pay for equal work; freedom in love; corporate greed and political corruption fueled by powerful lobbyists; and the increasing disparity between the rich and the poor, to name only a few. Her outspoken and common-sense ideas may shed a new perspective on the parallel conundrums of today’s world.

This bold, beautiful, and sexually progressive woman dared to take on society and religion. To make an example of the hypocrisy in what Mark Twain dubbed The Gilded Age, she exposed the extramarital affairs of the most popular religious figure of the day (Henry Ward Beecher). This led to her persecution and imprisonment and the longest, most infamous trial of the 19th century. But it did not stop her fight for equality.

Victoria’s epic story, set in the late 1800s, comes to life in a modern, fictional style, while staying true to the actual words and views of the many well-known characters.

What Inspired You to Write Your Book?
It was more who inspired me. When I first began to pursue my writing as a career back in the ‘80s, my friend Twyla in Nashville gave me a copy of a paper she had done in college about Victoria Woodhull. I had never heard of the woman, but at Twyla’s encouragement I began to research Victoria’s story and what I found amazed me. I had never particularly liked history in school, but reading about the characters and the everyday lives and interactions of all the people of the 19th century I knew by name just exploded my mind.

Then I began to discover that the issues and problems faced in the 1800s were ones we still faced today, and I felt we could maybe gain some insight from the great minds of that age, leading to a new perspective on these universal conundrums, and maybe even solutions!

I spent years categorizing the material into spreadsheets by dates, names, locations, and keywords before I actually began to write. And as I stated previously, the biggest task then became to edit it down into something smaller than a million-page tome. I was determined to be historically accurate and use the real-life characters’ words and ideas as much as possible. But I wanted to present the story as fiction so that others like me, who weren’t history buffs, could get excited about the story. I hope I’ve accomplished that.

How Did You Come up With Your Characters?
The main character is a real person, the infamous feminist, Victoria C. Woodhull. Victoria was the first woman to run for President (1872), before women could even vote. She was also the first woman to enter the male-dominated halls of the Senate Judiciary Committee, where she petitioned for woman’s suffrage. A popular orator, she and her sister and side-kick, Tennessee Celeste (Tennie C.) were also the first women stockbrokers on Wall Street and the first women to run a mainstream newspaper. The third main character is the famous Brooklyn preacher, Henry Ward Beecher, whose secret affairs as exposed by Victoria, causing life-changing consequences to not only the individuals involved but society as well.

About the Author:
Karen J. Hicks is retired and lives in Henderson, Nevada. She recently published her second novel, The Coming Woman, based on the life of the infamous feminist Victoria C. Woodhull, who was the first woman to run for U.S. President. Her first book was a self-help book titled The Tao of a Uncluttered Life. Karen served as in-house editor for author Steve Allen and has written several screenplays, as well as poetry, short stories, and essays. To learn more, go to http://www.karenjhicks.com/