You are here: Home / Fiction / Science Fiction / The Code of Rellik by Darrell and Zachary Wood 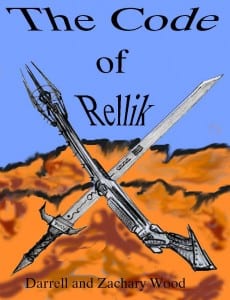 By now, we are all fairly familiar with what happens when two advanced civilizations meet and do battle in the heavens. Let us consider now what might happen if one of those civilizations wasn’t quite so civilized. Let us suppose that one of those cultures was in the middle of their dark ages, and for them, the right stuff, was defined by how many enemy heads could be removed before losing your own. Let us further conjecture that these primitives have the capability to disable all of your electronic devices. This is the force that the crew of the ship Desmonds Fire fatefully engages.

Reed, captain of the space ship Desmonds Fire, and Glan, the ship’s speciarian, investigate the wreckage of the war-torn planet of Arnok 4. Within the wreckage a disk is found. It is heavily damaged, but it still contains a ship’s manifest. One of the listings in the manifest is two tons of an extremely valuable metal, turillium. A hasty departure from Arnok 4 is made and Desmonds Fire sets out in pursuit of a convoy of four ships that recently left the planet.

The good captain and his crew soon realize two things. Acquiring a fortune is never easy, and in space, when the lights go out, only the savages remain.

Targeted Age Group:
Those who have never been exposed to “B movie” Sci-Fi and those who remember it fondly.

How is Writing In Your Genre Different from Others?
We use an omnipresent narrator. This style allows us to describe action on multiple spaceships, space stations, and across the vastness of the cosmos in real time. We are dialogue heavy and we tend to describe devices and procedures in a nuts-and-bolts fashion. We give our characters practical devices that follow, as much as possible, the laws of science. We also believe that each individual has a personality that should be easily differentiated from the other characters.

People sneeze, cough, cry, and drum their fingers. So do our characters. We believe that to make a character real you must endow him or her with all of the human (or non-human) characteristics that make that individual different from others of the same species.

What Advice Would You Give Aspiring Writers?
Listen to where your story takes you. You may find that a character you had intended to be a major player slips into the background. Don’t worry about sitting on a chapter for weeks and discuss, discuss, discuss.
Writing is re-writing, your first book will never, however, feel completed. On the practical side, learn all you can about formatting. After writing for numerous years, we were disappointed when we realized that it was going to take another six weeks to format our book for electronic media. Lastly promote to anyone and all.

Author Bio:
Darrell is a former chemical worker and Zachary is a computer technician. Both father and son were nurtured by “Drive in Sci-Fi”, dad from the drive in and son from VHS and DVD. The first of three Code of Rellik books was started when Zachary was in High School. There he met our otherworldly artist Bennett LLoyd, a man who can make broccoli look menacing, (or more menacing).

What Inspired You to Write Your Book?
My son having to read a Jane Austin book. We were overwhelmingly convinced that we could write something better.