You are here: Home / Children and Young Adult Books / The Circle of Friends: Book I…Lori by L. Diane Wolfe 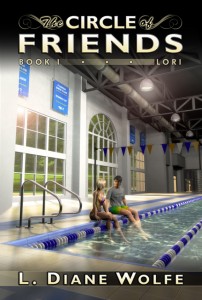 To the outside world, Lori Anders has it all. The only child of affluent parents, she is a gifted swimmer with Olympic dreams. Armed with a winning attitude and genuine spirit, Lori appears destined for success.

Yet despite her certainty in the pool, something inhibits Lori from achieving her full potential. Her focus on swimming has left little time for relationships. Lacking in confidence, Lori’s light has few opportunities to shine.

When an altercation with the school bullies brings her to the attention of the star quarterback, Lori finds herself in a unique position. Jason’s affections renew her hope and force the shy swimmer out of her comfort zone. But, will it be enough to achieve her lifelong dream?

What Inspired You to Write Your Book?
My stories have always come from dreams, and the entire series came from one. I saw the two main characters, Lori and Jason – they were in high school and she was a swimmer. My imagination continued the story after I awoke and pretty soon, I had enough to fill five books.

How Did You Come up With Your Characters?
Lori and Jason came from the dream, and the others just fell into place. Each one possessed an attribute I’d seen in someone and many of the names came from the Bible.

Book Sample
Lori’s focus for her last race was unmistakable. She took several deep breaths before bowing her head. Stepping onto the block, she crouched down, ready to spring.

“Gentlemen,” said Coach Holt as the whistle blew. “I do believe you’re about to see a school record broken.”

“How can you tell?” said Matt, but he received no answer.

Jason just watched, his own tension growing with Lori’s every stroke. She had another large lead and the other girls were fighting for second place. After the turnaround, Jason swore she was swimming even faster.

“Did she speed up?” Matt said in his ear.

Jason nodded and began cheering. The time was ticking away and he realized it would be close. When the whistle blew and the clock stopped, Lori turned to check her time.

More than two seconds faster than the record. She had succeeded.

This time she smiled as she swam for the side. The team crowded around her to congratulate Lori. She pulled off her cap, letting her wound hair fall free. Someone handed her a towel and she wrapped it around her neck. Her teammates continued to hover around Lori, caught up in the excitement.

When she broke free from their attention, Lori searched the bleachers and smiled when she located Jason. He went down to meet Lori as she approached the stands. Once close enough, she threw her arms around his neck and he lifted her off the cement.

“That was incredible,” Jason exclaimed, returning Lori to her feet..

He kissed her, amused by Lori’s determination. “I know you will.”

Giving her hand one last squeeze, he watched her return to watch the boy’s race. Jason rejoined Matt and Coach Holt, his own spirits lifted. Coach Holt smiled at him.

“Didn’t I say you couldn’t do any better than Lori?”