You are here: Home / Fiction / Romance / The Christmas Bargain by Shanna Hatfield 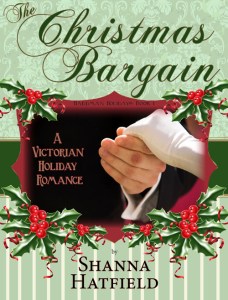 Luke Granger is about to get more than he bargained for…

As owner and manager of the Hardman bank, Luke Granger is a man of responsibility and integrity in the small 1890s Eastern Oregon town. When he calls in a long overdue loan, Luke reluctantly accepts a bargain in lieu of payment from the shiftless farmer who barters his daughter to settle his debt.

Philamena Booth is both mortified and relieved when her father sends her off with the banker as payment of his debt. Held captive on the farm by her father since the death of her mother more than a decade earlier, she is grateful to leave. If only it had been someone other than the handsome and charismatic Luke Granger riding in to rescue her. Ready to uphold her end of the bargain as Luke’s cook and housekeeper, Philamena is prepared for the hard work ahead. What she isn’t prepared for is being forced to marry Luke as part of this crazy Christmas bargain.

What Inspired You to Write Your Book?
The whole idea of someone opening their home and heart to a stranger in need inspired this story. The whole idea of selflessly giving, especially during the holiday season is at the heart of the book. I don’t think many people would willingly do what the hero does in The Christmas Bargain.

How Did You Come up With Your Characters?
The hero, Luke, seemed easy to develop. He’s intelligent, funny, and tenderhearted, although he’s definitely a man’s man. He grew up in the Hardman community, left to attend college, then returned to make his home there. Involved with many businesses and organizations, as well as owning the local bank, he’s someone the townspeople count on.
Filly, the heroine, took a little more creative development. She’s suffered greatly at the hand of her father, yet she has this wonderful fiery spirit that the readers sees in tiny glimpses at first. As the story progresses, her personality is peeled back a layer at a time.

Book Sample
After walking the horse out of the barn, Luke mounted while Filly shut the door. He held out his hand for her to mount behind him. Quickly glancing down at her skirts, she realized for the first time she wasn’t dressed in proper riding attire.
Luke grinned at her and wiggled his fingers. “Come on, Filly. It’s a little late to worry about propriety now, don’t you think?”
She took his hand and swung behind him, lacing her hands around his waist and leaning her head against his back. As they rode to the parsonage, Luke kept his hand resting on top of hers.
“I’d like to speak with you about your ride to the Jenkins farm,” he said, using his most official banker’s tone.
She should have known riding through town with her skirts up to her knees and hair flying would embarrass Luke. She was really going to have to work on behaving with more decorum. More like a proper banker’s wife.
He smiled and his icy eyes warmed to a liquid blue as he looked at her over his shoulder. “I’d like to discuss how enticing you looked with your skirts hiked up and your hair rippling behind you. I pictured you as some ancient Irish warrior queen riding into battle. Filly, my girl, you’ve been holding out on me by keeping all that glorious hair confined to buns or braids. I think we need a let-your-hair-down lesson to go along with our kissing lessons.”

About the Author:
A hopeless romantic with a bit of sarcasm thrown in for good measure, Shanna Hatfield is a bestselling author of sweet romantic fiction written with a healthy dose of humor. In addition to blogging and eating too much chocolate, she is completely smitten with her husband, lovingly known as Captain Cavedweller.
Shanna creates character-driven romances with realistic heroes and heroines. Her historical westerns have been described as “reminiscent of the era captured by Bonanza and The Virginian” while her contemporary works have been called “laugh-out-loud funny, and a little heart-pumping sexy without being explicit in any way.”
She is a member of Western Writers of America, Women Writing the West, and Romance Writers of America.