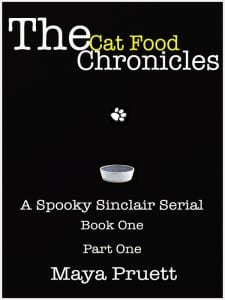 What inspired you to write your book?
Many years ago I was living in Hawaii, one of my roommates at the time had a cat and her name was Puka (but I called her Puky). Anyway, when my roommate moved back home to be with her family, she left Puky at the house, thinking she would eventually come back to live. There were a couple of other roommates, but Puky decided on me.

I told my neighbor Tom, a great lover of cats, that this crazy cat was following me around. And when I say following me, I mean to the store, to other friends houses, all over. I would come out of the store or someone’s house after hanging out for hours and there she would be. Well, my friend Tom made it very clear that the cat loved me, so I better embrace it.

I want to state here for the record that this is a true story and this really happened.

Okay, that said, right after I gave her my speech, she got up, walked over and tucked herself into my rib cage purring her love into me. We became fast friends and after about a year, I sat down and wrote a poem about her called, The Cat Food Chronicles. I wasn’t then nor am I now a big writer of poetry. In fact I didn’t right at all back then. Years later when I started writing I decided to turn the poem into a novel, because I liked the title. I wrote about two chapters then forgot all about it. Several more years past, and I had been writing a lot by then, mostly children’s and non-fiction stuff, anywho, about this time I found myself in Alaska.

Cut to early 2008 and my first Alaskan winter. I was on the computer and I somehow found a article about entering to win a scholarship to, The Santa Barbara Writers Conference which is a very well know and prestigious conference. In order to submit, you needed to send in five pages of a novel in progress. I took out about three different things, all of them about two chapters and decided on The Cat Food Chronicles. I re-wrote very little of it, then sent it off to Santa Barbara.

About three months later my boyfriend woke me telling me that the Santa Barbara Writers Conference had just called. I was in shock and thought, could I possibly have won the scholarship? Well, let me tell you, my hands were shaking when I called them back. I can honestly say that, that day changed my life forever, because, yes, I did win the scholarship.

I was elated for about two hours and then I thought, OMG I have to write a book! So, I went to the library in hopes to mine it for ideas. That night I also said some prayers for guidance. The next morning I awoke and had a very strong visual about a pop-culture celebutante dying on stage and my character Spooky, the lead character in the book, solving the crime. I knew I had something, so I just started writing and writing.

Of course, I am still elated about winning the scholarship, and when I went to the conference, I loved every minute of it! It was very nurturing, empowering and inspiring. I met some great writers who are now my good friends and most importantly I met the late great Ray Bradbury whom I found out later helped launch the scholarship. I got to hold Mr. Bradbury’s hands and kiss him. Then I told him I that I had loved him since I was 16, when I read Fahrenheit 451, which had changed my life, as well.

It took me four years to finish The Cat Food Chronicles because I had so much to learn. Also, I was writing other things and finishing other projects. I have learned a lot writing this book, and believe me, I still have a lot to learn. Still, it never would have came about if my sweet little Puky hadn’t been there for me and loved me first. She was the best!

If you like Sookie Stackhouse, Stephanie Plum, KoKo and Yum Yum, you’re
sure to love Spooky Sinclair, the lead character in the wickedly
funny, seriously psychic, six part series, The Cat Food Chronicles.

Following in the footsteps of Britney, Lindsey, and the likes,
Callie Bryant, Hollywood’s newest bad girl, comes to town
as the lead in the much awaited Romeo and Juliet … the Rock Opera.

When Callie actually dies on stage, Lily, Holly and Spooky (two
psychic sisters and one psychic cat) get together with the irkily
handsome, yet musically inclined Detective Richardson to solve the
crime.

Set in San Francisco, The Cat Food Chronicles is a story of
cats, crime, cuisine, and lol comedy.

How do you see writing a book in the Pet Genre as different from writing other genres of books?
For me it is more fun because I gave my lead character, a cat named Spooky Sinclair, plenty of super powers. She’s also ridiculous and hopefully hilarious. And she gets to do and say all the things we don’t dare. Just ask, The Counting Crows. I believe as they say that, “Everybody wants to pass as cats.”

Advice to someone that is thinking about or currently working on a pet book
Enjoy it, the research is fun. Kiss, pet and thank all animals that inspire you. Let them hang out while you are working.

How did you decide how to publish your book and where is it published through:
What happened was I found an article in Poets and Writers on self publishing. It hit home and snowballed very quickly. When I say quickly, I mean considering I had a lot to learn and a lot of help from friends. I did not use another company to help me. I own all my books, built my covers, and published under my own company.

When I first started writing, I looked at self publishing for my non-fiction stuff, but it was not really feasible for me (this was some 10 years ago) now it’s a whole different animal, and since I am a control freak, it seems to suite me. We’ll see.

Author Bio:
Maya likes to count chickens before and after they’re hatched, attempt car repossession alone at night, debate television personalities while in her living room, and of course speed-walk!

She is the creator of Spooky Sinclair, the lead character in the delightfully ridiculous, six-part serial novel, The Cat Food Chronicles. Maya is a writer, actress, and make-up artist with national and international credits. She has been professionally entertaining people for over 25 years, and was the recipient of the 2008 Santa Barbara Writers Conference Endowed Scholarship Award, launched by the late great Ray Bradbury. Maya writes in many genres, including fiction, non-fiction, children’s, and young adult.