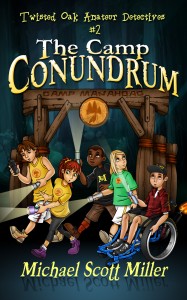 When a series of unusual accidents threatens the survival of Camp Manahoac, the camp’s owners frantically call the police to investigate. Detective Johansson sends the Twisted Oak Amateur Detectives—Tubby, Tyler, Dontrelle, Amanda, and Melanie—under cover to find out what’s going on. Are the mishaps just a few unfortunate coincidences or is someone trying to sabotage the camp?