You are here: Home / Fiction / Mystery/Suspense / The Blue Coyote by Karen Musser Nortman 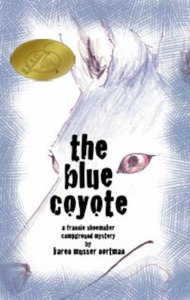 The Blue Coyote is an IndieBRAG Medallion honoree and a finalist in the 2013 CLUE Awards. Frannie and Larry Shoemaker love taking their grandchildren, Sabet and Joe, camping with them. But at Bluffs State Park, Frannie finds herself worrying more than usual about their safety, and when another young girl disappears from the campground in broad daylight, her fears increase. The fun of a bike ride, a flea market, marshmallow guns, and a storyteller are quickly overshadowed. Accusations against Larry and her add to the cloud over their heads. Frannie begins to puzzle out the mystery: Are the itinerant road workers as much of a threat as Frannie thinks? What about the lone woman camper who also disappears? Or is the girl’s deadbeat dad behind it all?

What Inspired You to Write Your Book?
We had a similar incident while camping and I wondered at the time whether the preoccupation with Stranger Danger might sometimes cause a child to ask the wrong person for help. We also often visit events such as flea markets in neighboring towns and take in any entertainment the campground has to offer. These present a variety of interesting characters.

How Did You Come up With Your Characters?
The main characters were developed for the first book in the series, “Bats and Bones.” I wanted them to be realistic senior citizens, not caricatures. They should have a few limitations from their age but not be crotchety, narrow-minded people who resist anything new. People who camp are obviously not shut-ins and usually receptive to meeting new people and trying new things. I has very influenced in developing the actual personalities by Jeff Gerke’s “Plot versus Character.”

Book Sample
When she got to the group, she guided Joe around the outside of the people toward the trailer but was puzzled by some angry looks on several of the strangers’ faces. Now she recognized the parents of the training wheels girl in the middle of the group, the mother looking rather frightened. Ranger Sommers was talking quietly with Larry, who was gesturing cautiously, backed up by the rest of their friends.
“Sabet, take Joe in the camper and help him find some dry clothes, okay?” Frannie said, and turned to her husband and the ranger. “Larry, what’s going on?”
“The little girl who was riding her bike past here—they can’t find her,” Larry said quietly.
“Oh, no,” Frannie said. “We saw her talking to that woman down by the tent loop. Did anyone see her after that?”
Mickey jumped in. “Her parents think Larry has something to do with it!”
Ranger Sommers shook her head. “No one’s accusing anyone—we’re just trying to track where she…”
“I am!” the mother interrupted. “He’s a Blue Coyote! Taylor told me so last night!”
The ranger turned slowly. “A Blue Coyote?” Even the eyebrows went up a little bit.
“Stranger Danger—it’s our code word, and she told me he’s a Blue Coyote,” the mother insisted. “He wouldn’t leave my daughter alone!”
“I just commented on the training wheels—that she needed to get rid of them. The noise was very annoying,” Larry said helplessly.
“You better check on that little boy with them, too,” one of the mother’s companions almost yelled in the ranger’s ear. “Did you see the bruise on his face?”
Frannie stood by, stunned. What were these people accusing them of? Larry, a life dedicated to law enforcement, a loving father and grandfather…of course, they didn’t know that, but still the charges burned. She started to protest to the ranger but Sommers waved her away.

About the Author:
Karen Musser Nortman, after previous incarnations as a secondary social studies teacher (22 years) and a test developer (18 years), returned to her childhood dream of writing a novel. Bats and Bones, a cozy mystery, came out of numerous ’round the campfire’ discussions, making up answers to questions raised by the peephole glimpses one gets into the lives of fellow campers. Where did those people disappear to for the last two days? What kinds of bones are in this fire pit? Why is that woman wearing heels to the shower house? Karen and her husband Butch originally tent camped when their children were young and switched to a travel trailer when sleeping on the ground lost its romantic adventure. They take frequent weekend jaunts with friends to parks in Iowa and surrounding states, plus occasional longer trips. Entertainment on these trips has ranged from geocaching and hiking/biking to barbecue contests, balloon fests, and buck skinners’ rendezvous. Frannie and Larry will no doubt check out some of these options on their future adventures. Karen has three children and eight grandchildren. She also loves reading, gardening, and knitting, and can recite the 99 counties of Iowa in alphabetical order.