You are here: Home / Bargains and Freebies / Bargain Books Under $3 / The Bellringer by William Timothy Murray 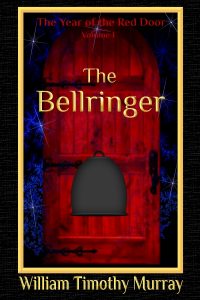 The Bellringer by William Timothy Murray

For centuries, the Great Bell was silent…

It remained undisturbed, nearly forgotten by history, hidden away in the ruins of an abandoned fortress. The enchantments within its iron slumbered, its secrets protected by silence. Until someone discovered how to ring the Bell, other secrets would remain safe.

One day, while running an errand, a young store clerk took a wrong turn, then another, until he found himself deep within the old fortress where the Great Bell waited.

It waited for him.

And when the hapless clerk rang the Great Bell and released its enchantments, his troubles began.

For he had become the Bellringer.

He claimed it was all an accident, that he did not mean to ring the Bell. Fate, it seemed, thought otherwise, and proof of the Bellringer’s destiny began to emerge just as the world spiraled into war. Revolt and treachery worked to break apart the Seven Realms. Armies were on the march. The faraway King, obsessed with his own power, seemed unwilling or unable to prevent the looming catastrophe.

Perhaps a new King was needed…if only someone could penetrate the secret of the King’s power and take the throne before it was too late. It was foretold that the person who discovered the True Name of the King would become the next King. But who was capable of such a thing?

The Year of the Red Door has begun, and four months have already passed by. This is the story of the last 244 days. Uncanny things are taking place in the world, mysterious powers are stirring, and there are signs of coming change. Like pieces on a game-board, ancient forces are moving into position, gathering strength. Many sense the portents and see the signs, but few know their meaning. Fewer still understand what must be done. But who is there to do it? In only 244 days, six intrepid travelers must cross thousands of miles, to the far edge of the world, to find a place that may not even exist. A legendary place called Griferis where a new king may be prepared, trained, and judged for worthiness. It is their bid to find that place, to discover the secret Name of the King, and to make one of their companions the new King. But hope is thin, and time runs out. Can the Name be found? Can the Usurper use it to take the throne? And will it make any difference? It already seems too late.

In the spirit of J.R.R. Tolkien and Charles Dickens comes a new heroic tale, a story of ageless love and brave determination, of tragic loss and the hope of redemption. During this quest, mythic powers arise from the ancient past, fate collides with destiny, and the world edges swiftly to its final destruction or to its ultimate fulfillment. Only the Bellringer can tip the balance of fate, but the world is almost out of time…

What Inspired You to Write Your Book?
I wanted to explore certain notions of immortality, altered states, and the nature of power. But the story needed to be a rich, immersive epic, character-driven, but within an expansive setting. Authors such as Jane Austen, Victor Hugo, Charles Dickens, Boris Pasternak, and (of course) J.R.R. Tolkien were strong influences.

How Did You Come up With Your Characters?
The main protagonist, I decided, needed to be someone relatively sheltered. Educated up to the limits of what was provided in a small town, but ignorant and naive about the world at large. Otherwise, the characters that come and go throughout The Year of the Red Door were defined and developed according to need, plot, and situation. Since it isn't plausible for an epic of this sort to be limited to only a few characters, the population of characters is quite large.

Book Sample
"You are troubled, too," she said without turning. Robby stepped up beside her. "Like me, you are lost in change, not knowing what may come of things."

"You know what you must do, but not what you should do."

"They are the same," she said, turning to him. "When you do what you must, it is as it should be, and leads to the next and the next. This age is coming to an end at last, as all things must, and you are caught between the ending and the beginning of things, born of one but living into another. Why should the Bellringer of Tulith Attis be so different? Does fate ignore the unknown person in favor only of kings and queens and the mighty?"

"I'm not sure I believe in fate," he said, not meaning to be argumentative but realizing too late that it probably sounded that way.

"Fate. Destiny. Chance. Doom. They are but different seasons of the same year," she replied. "Call it what you will. You cannot escape it, no more than you can escape your skin."

"Everyone talks to me and about me, but no one will speak plainly," Robby grumbled.

"We speak as plainly as we can," Serith Ellyn replied sympathetically. "It is for you to hear or not to hear. Listen first from your heart, then let your head guide you."

Robby nodded, but he was not sure that he really understood.

"We Elifaen are afraid of change," she explained. "Perhaps we have seen too much of it. All who live long in this world sense the passing away of things. The forest shrinks before the axe and the plough, and meadows are covered with cobblestone and building-brick. White waters of anxious rivers turn dark and slow and wind more peacefully to the sea. Even the sun seems not so high or so bright as in the days of our youth, and the snow not so fresh or clean, only colder. We attach ourselves to these things, as they to us, and, even as our attachments grow more tenuous with each passing year, we cling the harder to them. Yet so, too, are the works of our hands, as the earth strives to take back what is hers. Proud houses fall into decline and great cities pass into ruin. The stories of those things are lost to forgotten languages and moth-eaten scrolls. Vine and root grapple with the rune carved in stone, and rust carries away, fleck by fleck, the great gates of iron."

For joining the author’s email/newsletter list you will get:
Eighteen Objects of Power (e-book)