You are here: Home / Fiction / Mystery/Suspense / The Arms of Death: Loch Lonach Mysteries with a Scottish Slainte, Book One by Maggie Foster 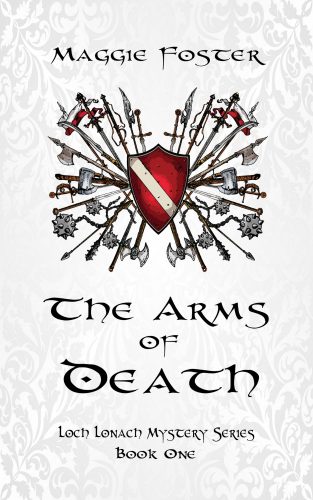 Book One in the Loch Lonach Mystery Series, Mysteries with a Scottish Slainte

Ginny Forbes is a nurse with an insatiable curiosity, a special talent for critical thinking, and a gift for getting into trouble. When one of her ICU patients dies unexpectedly, she finds herself on the trail of a centuries-old secret.

Ginny is no stranger to investigation. Her hobby requires ferreting out and fitting together the traces of her ancestors, to create a mosaic of their lives. She knows how to dig and she knows how to read between the lines.

When a handsome newcomer offers to help, she allows him to tag along, but reports back on his actions to her long-time boyfriend, also an historian and genealogist. Following the clues seems no more than a lark, but between the cause of death and the growing jealousy of her two helpers, Ginny is about to find out just how dangerous idle curiosity can be.

What Inspired You to Write Your Book?
I adore mysteries. I've read them my whole life. Several years ago, when I found myself with some time on my hands, I decided to see if I could write one, modeling my own work on the Masters of Mystery authors, particularly the women. I had an idea and I wanted to see if I could turn it into an entertaining story. As it turns I could.

How Did You Come up With Your Characters?
The characters in all my books are amalgams. None is patterned after a single real individual. The heroine in this book, however, comes closest. She's the woman I wish I had been at her age. The advice I kept getting was, "Write what you know." I did that, sticking closely to my own life experiences for inspiration and the details that make a story come alive.

Book Sample
Ginny rose, crossed the small room, and reached for the door handle, but he was there before her. He looked down into her face.
“Ginny, whether it’s true or not, I think it would be a good idea if you told everyone you’ve given up investigating Professor Craig’s death.”
She looked up at him, her breath tight in her throat. “Anyone in particular?”
He shook his head. “I don’t have a favorite suspect. Do you?”
She shook her head, her eyes on the door handle.
“What is it you’re not telling me?” he asked.
She swallowed hard, then met his eyes. “You know everything I know.”
He studied her face for a moment, then sighed. “All right.” He opened the door and let her go.
Ginny hurried out and back to her own part of the hospital, thinking hard. There was really no reason to suspect him of anything. He was behaving exactly as she would, if their positions were reversed.
A small voice in her head corrected her. Except—he had been following her.
She frowned, pushing the thought aside. Even if everything Hal had told her turned out to be true, it was all circumstantial. Not proof.
True. The small voice again. Just one question, though, it said. And it probably means nothing, it said. It was just, if he was telling the truth about his movements this evening, if he had truly been down to the classroom to get a book, then where was it? His hands had been empty.

Excerpt from The Arms of Death by Maggie Foster.
All rights reserved.