You are here: Home / Fiction / Action & Adventure / The Ark by Christopher Coates 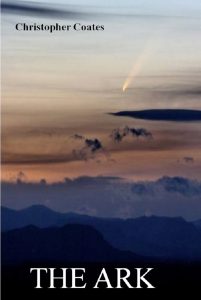 In the not too distant future, technology has developed to the point where a person can be placed in a Sleep State, which is a cross between suspended animation and a drug induced coma. Theoretically a person can be put to sleep for any length of time and age only a couple of days for each year that they are asleep.

At about the same time that the longest sleep trial to date is being completed, it is discovered that there is a very unusual comet approaching Earth and almost everyone will be killed by the unusual radiation that it carries.

Immediately, our government proceeds, to build a sleeper facility large enough to hold as many specially trained men and women as possible.

During the preparations the government must finish the facility, select the team of sleepers, and at times take drastic steps to maintain secrecy.

A time is pre-set to awaken the sleeper team, but, upon awakening, they learn that things have gone wrong. They now must find ways to carry out their mission in the new and strange world in which they find themselves.

What Inspired You to Write Your Book?
This was an idea that I had in my head for many years

How Did You Come up With Your Characters?
I randomly choose characters as the book developed. Once they were all in the story, I went back and created the personalities

Book Sample
Through the dim glow of red auxiliary lights one could just make out the shapes of the dozen coffin sized capsules lined up in four neat rows. The capsules were completely black in color, with its sides rounded and smooth. Topping the capsule were are two transparent pieces, surrounded by a black frame. The whole lid assembly fit perfectly on top of the capsules and it was almost impossible to see where the sides ended and the top began. Each capsule was numbered with a three inch high red adhesive label on the front end. There were several rows of indicator lights and LED displays on the end of each capsule.
At one end of each row, a console of complex looking computer equipment with several small monitor screens, displayed what seemed to be an EKG readout, but anyone with any medical knowledge would have noticed and been concerned at the terrifyingly slow heart rate that was presented. Ten of the capsules had multiple rows of green lights, some flashing and others were on continuously. On the capsule numbered ten, there were two lights that were not green, one was yellow and the final one glowed an ominous red. On capsule three there were no lights at all.
Through the transparent top of each capsules the form of a nude human was just barely visible. The people were a mix of male and female gender and of several different races. The only things they had in common besides their nudity was that they all looked to be in good physical condition and seemed to be between twenty and forty years old.
There was an unusual mask covering the mouth and nose of each person. It looked similar to a standard oxygen mask, but was of a heavier material and was off white in color. The masks fastened behind the head and had two different tubes connecting to them. The other ends of the tubes connected to ports fastened into the wall of each container. The masks along with an odd mix of tubes and wires running in and out of different orifices made the occupants of each capsule look almost mechanical. In the available light it was not possible to tell if the people were dead or alive.
If you were to look around, you would see that the capsules are all housed in a large cavernous chamber. The ceiling must have been twenty feet high, and the square room had walls that were all about fifty feet in length. One wall was almost completely covered with computer equipment and medical monitors. On the opposite wall was a large steel door that resembled a large airlock. There were no windows in the room, but there were twelve video cameras suspended from the ceiling that together covered every inch of the room.
Suddenly and without warning six banks of overhead florescent lights snapped on. Even though the change in lighting was extreme there was no obvious reaction from any of the occupants of the capsules.
Seconds later a bright yellow strobe light above the long sealed door began flashing and the activity on several computer panels increased.
Following a brief pause there was a barely audible hissing sound and the eleven hundred pound door slowly started to swing inwards. As soon as the door was open four people in fully encapsulated yellow biohazard suits slowly came into the spacious chamber. They had been packed tight in the tiny space and almost had to struggle to get out of the airlock. Their movements were slow and they were rapidly looking from one side of the room to the other. From the way that they moved it would have been obvious to even a casual observer that there was a high level of uncertainty or anxiety in each of them. As soon as they had moved into the room the door behind them swung shut, and within thirty seconds the yellow strobe briefly stopped flashing. The four new arrivals each moved to one of the rows of capsules and began assessing the computer terminals. As they were beginning their tasks they were aware of the strobe light beginning its flashing again and at last three similarly dressed members of the team joined them. These three went directly across the chamber to the wall of monitoring equipment and began rapidly inputting commands into the futuristic looking systems.
At once there was a curse from one of the oddly dressed people at the end of the far right row of chambers. “Major system failure capsule 3” an agitated female voice said. There was a slightly mechanical sound to the voice. The mechanical sound, heard on the electronic headsets, was a result of the positive pressure breathing devices in the masks of each team member.

Buy The Ark On Amazon