You are here: Home / Fiction / Mystery/Suspense / The Alex Hollick FBI Series (Part One: The Bloodbath Ritual) by Andrew Downs 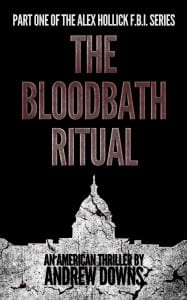 “A gritty American tale that blends mystery, suspense and romance seamlessly into one nail biting, page turning journey, through the eyes of a troubled young FBI agent.”

In 1985, Alex Hollick takes an ill-fated walk on the dark side of the FBI. Amidst the anguish of a botched sting operation, Hollick learns of the internal corruption that helped shape the deadly event. He must now travel to Virginia, unknowingly as a suspect in the scandal, where he is kidnapped and tortured by three misfit CIA agents. Hollick faces an agonizing choice, to join a clandestine division, burrowed deep within the FBI, or to take his chances as a civilian, with a head full of secrets. Hollick’s choice leads him to a dark underworld, where he must participate in a cover up, nearly as bloody as the scandal itself. As the troubled young agent attempts to transition into homicide investigations, with an emphasis on satanic crime, good and evil intentions threaten to expose the plot and destroy him in the process. His career and personal life collide, as Hollick is tormented, by a flurry of uncontrollable events, and forced to tread carefully, through minefield of consequences, to protect himself and the woman he loves.

The Alex Hollick F.B.I. Series follows the life of a young FBI Agent in the mid to late eighties. Given the task of investigating satanic crime for a secretive division of the bureau, Hollick faces the difficulties of maintaining balance between the heinous nature of his work, and the chaotic temperament of his personal life, which all too often clash.

How is Writing In Your Genre Different from Others?
It’s hard to say, I haven’t tried any others, but like with most books, the plot must be engaging.

What Advice Would You Give Aspiring Writers?
If you’re writing a series, write every book before publishing the first, you never know what ideas you may come up with after it’s too late to change things.

Andrew’s debut novel, “Alex Hollick: The Bloodbath Ritual,” brings a new and refreshing twist in the modern thriller genre. Book One of The Alex Hollick Series makes an original mark, with an intense plot and complex characters. Andrew discards the basic thriller/killer template, in favor of an elaborate series of intertwining events, that flow together seamlessly.

What Inspired You to Write Your Book?
A vision I had been developing in my mind for a few years. I had to get it out.