You are here: Home / Fiction / Romance / That Thing Called Love by Abi Kay 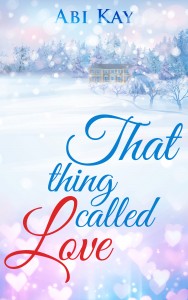 This is a true romance in every sense, and will have you hooked right from the start.
The novel is set within the backdrop of the British legal industry. Isabel Harris and Edward Taylor are great colleagues but they are the most unlikely of couples.
Edward: the charming ladies’ man, enigmatic, devilishly handsome and the best barrister around. He sets hearts beating wherever he goes and has a following of female admirers that stretches on and on.
Dowdy Isabel is obsessed with her job, but damn good at it, and in contrast lives a simple life and is seemingly content with her quiet existence. She is very cagey about her personal life, and gives nothing away about her past.
They never look upon each other as anything other than work colleagues.
That is, until a fire at Isabel’s flat leads to her spending Christmas at Edward’s family home, where they begin to see a different side to each other. Edward’s mother is dying of cancer, and Isabel helps Edward though this difficult time, and during the process, they begin to develop feelings for each other. After the funeral however, when they return to work, Edward seems to go back to his normal self with his hot girlfriend Amanda, and so Isabel decides she should ignore whatever it is that she feels. She thinks he is way out of her league anyway, and would never dump his stunning girlfriend for someone like her. As time goes on, she becomes more and more convinced of this, as when Edward and Amanda plan a romantic getaway to Paris, Isabel is convinced he is going to propose to her.
However, in a strange twist of events, they finally end up confessing their feelings to each other.
But any happiness is short lived, as this euphoria is followed by a shocking revelation relating to Isabel’s past.
This unimaginable secret threatens their relationship before it has even begun, and forces Isabel to make the most difficult decision of her life.
This story is full of tension, love, laughter, sadness, tears, comedy and everything in between. Just the sort of novel you need to come home to after a hard day at work.

What Inspired You to Write Your Book?
I have worked in the legal industry all my life, and come across some really interest characters and cases along the way, and I live in England and am surrounded by beautiful landscapes, vibrant cultures and historic buildings with a rich heritage. All of these combined with my own imagination led to the creation of the story.

How Did You Come up With Your Characters?
I have created the characters from my own imagination, and developed them so that they are interesting and easy to love, but some of the traits I have seen in people through my work, and socially, and I have just developed these with artistic and creative licence.

CHAPTER 2
It was the middle of the night, or to be precise, it was 3 a.m. on Monday morning, when Isabel was woken from her deep sleep by the beep of her mobile. She slowly brought her hand out from under the duvet and blindly reached for her lamp. She rubbed her eyes when the light went on. She bent over and looked at her mobile to see that it was a message from Edward. Why on earth was he texting her at three o’clock in the morning, she thought to herself.
The message was brief and read:
“Mum ill in hospital just found out driving down now you will need to get someone to cover trial. Sorry.”
Isabel started to reply to the text, but then she stopped. He was probably driving so she shouldn’t distract him. Should she phone or not she asked herself, then without thinking any further she called him.
‘Edward, I’m sorry to hear about your mother.’
‘Thanks,’ was all he could say, but she heard the anxiety in his voice.
‘Please don’t worry about anything this end, we’ll sort things out, you know that. You just go to your mum and look after her, and I hope she gets better soon.’ God! She was babbling. Stop talking woman, she thought herself.
‘Right, okay. I’m sorry I disturbed you so late in the night, I should’ve thought about the time,’
‘No, not at all, its fine.’
‘Alright then. Speak to you soon’
‘Yes goodbye.’
‘Good night…oh and Isabel….’
‘Yes?’ she asked.
‘Thanks.’
Isabel got into work early the next morning and sorted Edward’s replacement for the trial, although she was certain that when Edward heard that the only barrister she could find as his replacement was Norman, he would not be too pleased.