You are here: Home / Children and Young Adult Books / Teaching A Melody by Ashley Chunell 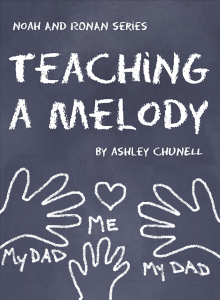 It’s the year 2023 and Melody Nash-Shea is 6 years old and ready to start kindergarten.

This story focuses on Noah and Ronan’s struggle as fathers when they send their daughter to school for the first time.

When everyone starts to find out that she has two dads, Noah and Ronan must teach Melody the concept of bullying, what makes a family and how to stand up for what she believes in.

This fourth book in the Noah and Ronan Series gathers characters old and new to help Melody and her dads get through kindergarten, as well as join Noah and Ronan as they celebrate their 10-year wedding anniversary.

What Inspired You to Write Your Book?
I wrote “A Miracle Melody” back in 2013 and right after I wrote it, I began writing the fourth book in the series. I worked on it for a couple of weeks until finally, it didn’t go in the direction I wanted and I scratched the entire thing. I published “A Miracle Melody” in June 2014 and that was when I gave the fourth book another shot. I always wanted it to center around Noah and Ronan sending their child to school and bullying, and once again, there are some real-life moments thrown in there. I also made some exciting things happen with Daugherty and Finola.

How Did You Come up With Your Characters?
Well, newer characters include Noah and Ronan’s daughter Melody and their friend Finola. For every character, I brainstorm what i want them to be and whatever names I like. For Finola, I searched for many Irish names until I finally settled on Finola Shaughnessy. For Melody, her name was a given.

Book Sample
Noah stood by the stove making pancakes while Ronan sat at the table with his laptop and Melody was in the living room watching cartoons.

“Huh?” Ronan let out as he shot his head up at Noah. “I want chocolate chips.”

“I know you do.” Noah rolled his eyes with a smile as he turned around to look at Ronan. “What’s got you so distracted over there?”

“Oh, sorry, I’m on The Henderson Buzz.” Ronan said as he continued to look at the laptop. “I’m trying to remember my password.”

Ronan typed in Noah’s birthday and was successfully logged in. “How did you know that?” he asked his husband.

“Because I remember when we made our Henderson Buzz accounts and we couldn’t think of passwords, so we used each other’s birthdays.” Noah said. “And speaking of that long ago, we haven’t lived in Henderson in nine years. What are you doing on The Henderson Buzz?” he asked with a laugh.

“Oh, I want to see!” Noah said as he walked over to the laptop. “Open that one.” he said as he pointed to a thumbnail.

Ronan opened a picture of Daugherty and Derek sharing their first kiss as husbands.

“I like this one.” Ronan then said as he opened another picture of their friends sharing their first dance.

“It looks like we’re in a lot.” Ronan told him as he continued to click on thumbnails of pictures of them dancing and mingling at the wedding.

“Oh, Melody’s in that one.” Noah said as he pointed to another thumbnail.

“Why isn’t it showing up?” Ronan asked as he refreshed the page.

“Wait, it says something.” Noah said as he read the screen. “This photo has been flagged for review.”

“What the hell does that mean?” Ronan asked.

“I don’t know. Call and ask Daugherty.” Noah said before he went back over to manage the pancakes while Ronan called his friend.

“Hey, man!” Ronan said into the phone. “Yes, I saw the pictures. That’s actually why I’m calling.” he began. “We were looking at the thumbnails and one of the pictures is of me, Noah and Melody. We clicked on it, but the picture didn’t show up and it said it’s been ‘flagged for review.’ What does that mean?” he asked.

“Oh, okay. Well, could you email the picture to me then? Thanks. Bye.” Ronan said before hanging up the phone.

Ronan let out an agitated huff. “He said ‘flagged for review’ means that another user reported the picture and The Henderson Buzz has to review it before it can be posted.”

“Well, why would someone flag that picture?” Noah asked as he brought over their breakfast. “I mean, if they’re a homophobe, why didn’t they flag all of the wedding pictures? That picture was just us with our daughter.”

“Exactly.” Ronan said as he stood from the table in aggravation. “It’s not that they’re a homophobe. Whoever did it has a problem with us being dads and having a kid. That’s why our picture was flagged and none of the others were.”

“You know what, just forget about it.” Ronan then said. “It’s not worth getting upset over. Daugherty said he’s going to email me the picture and he’ll work on getting it posted again.”

“It’s a bit unlike you to just back down from this.” Noah said.

Ronan shrugged. “As annoyed as I am about it, we have more important things to be focusing on. Like Melody and her first day of kindergarten tomorrow.” he said.

“You’re right,” Noah began. “But I’m more than annoyed about this. So, just so whoever flagged that picture doesn’t get away with it…” he continued before sitting down in front of the laptop.

“What are you doing?” Ronan asked. “You can’t say anything to whoever did it. That kind of stuff is anonymous.”

“Then what are you doing?” Ronan asked and looked at the laptop to see his own inbox open. He watched as Noah opened the email from Daugherty and saved the photo. Noah then logged into his Henderson Buzz profile and uploaded a new avatar.

Ronan couldn’t help but smile as he watched Noah’s avatar go from a picture of the two of them that hadn’t been changed in nine years to the picture of them with their daughter at Daugherty’s wedding.

Noah looked up at his husband with a cute, victorious smile on his face.

“You never cease to amaze me.” Ronan said as he wrapped his arms around Noah and pressed a kiss to his husband’s head.

“You should make it your avatar too.” Noah said. “They can’t flag all of us.”

Ronan giggled. “How about we eat breakfast first, and then continue with getting back at bigots?”

“Sounds like a plan.” Noah said with a kiss to Ronan’s lips before they called Melody in for breakfast.

About the Author:
Ashley Chunell is a Romance, M/M and GLBT author.

In July 2013, Ashley published her second novel and first GLBT book, “A Melody in Harmony.” The book is the first of what is now her Noah and Ronan Series. The novel received 5-star reviews on Amazon and Barnes & Noble and was recommended by USA Today. Ashley chose to write a GLBT story after becoming very involved and committed to equal rights and wanted to tell a story focusing on fighting for equality and showcasing two, young men in love. Ashley went on to write and publish a sequel titled “New Melody, Same Harmony,” centered around marriage equality. The sequel also received 5-star reviews on Amazon and Barnes & Noble. The third book in the series titled “A Miracle Melody” focuses on the struggles of gay parenting and fatherhood when Noah and Ronan decide to have a baby. The book was released on Father’s Day, June 15, 2014. In its first week, the novel reached #2 on Hot New Releases in Fatherhood for Kindle and was made Book of the Week on Queer Town Abbey. “Teaching A Melody” was released on January 6, 2015 and is the fourth installment in the Noah and Ronan Series.

Ashley also puts real life into her books. A lot of the homophobia and ignorant remarks in her Noah and Ronan Series were based off of things Ashley heard and witnessed in real life, which made her stories all the more realistic to her.