You are here: Home / Fiction / Romance / Taking A Chance by Jill Blake @Jill_Blake_ 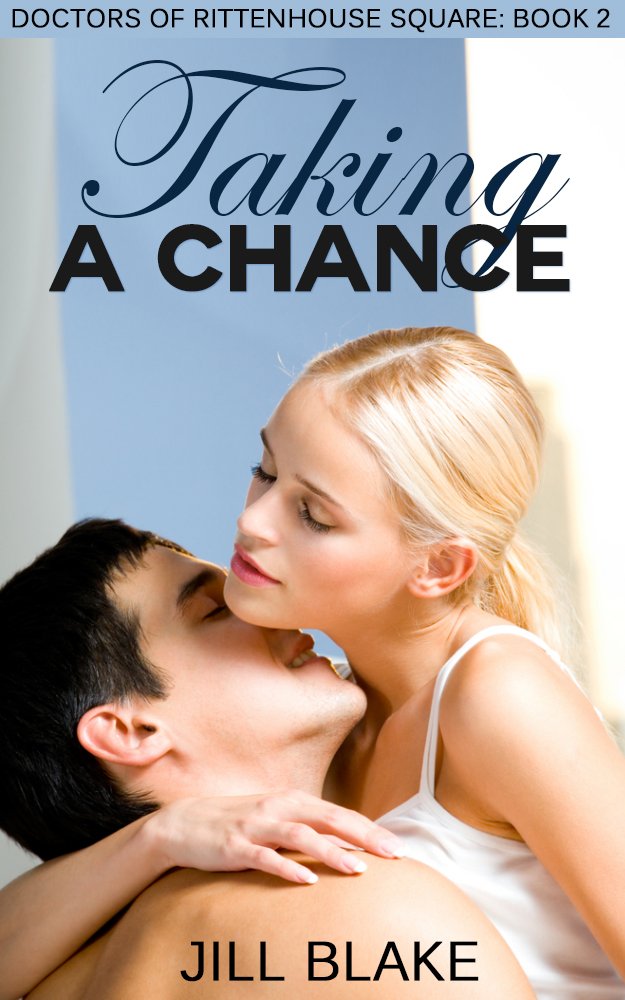 When Samantha Winters’ career as a big-city doctor leads to major burnout, she applies for a temporary position at a small clinic in central Pennsylvania. She’s as out of place in the town of Oakridge as a pair of high heels in a cow pasture, but that won’t stop her from going after what she wants. And what she wants most–after rediscovering her passion for medicine–is a family of her own: a loving husband and kids.

Alex Kane is the local boy who made good. He’s spent years building his computer start-up into the biggest employer in Oakridge. Between that, and raising his sister’s orphaned kids, he’s ready for a break. What he really wants is to cut loose and have some fun. Too bad the new doc in town isn’t interested…. Or is she?

What Inspired You to Write Your Book?
Career burnout is something many physicians face, particularly those of us in primary care.

In Taking a Chance, Dr. Samantha Winters takes a break from her big city medical practice when she experiences a major case of burnout. She rediscovers her passion for medicine–along with the love of a lifetime–in the most unlikely of places.

How Did You Come up With Your Characters?
First came the idea. A burnt out big city doctor, seeking refuge in a small town. A country boy who had to give up his dreams in order to raise his sister’s kids. Both find themselves at a crossroads in their lives, but also at cross-purposes.

The supporting characters include familiar faces from the other books in the Doctors of Rittenhouse Square trilogy. Each book in the series is self-contained and can be read as a stand-alone.

Book Sample
Samantha cut off the motor and sat in the sudden stillness, hands clenched on the steering wheel. A faint breeze stirred through the open window, teasing strands of ash blond hair that had escaped her tight chignon.

She blinked and took a deep breath. The scent of blooming azaleas filled her nostrils. For a moment, she wondered if she should restart the car in order to close the window. But a brief glance around had her dismissing the thought. Eleven in the morning, and not a soul in sight.

If not for the sign out front that read Oakridge Urgent Care, she might have thought she’d come to the wrong place. Like nearly everything she’d seen since rolling into town, the clinic looked deserted. Horizontal blinds shuttered across the windows. A handful of envelopes and advertising circulars peeked from the top of the mailbox beside the front door.

It was the middle of the week, when ordinarily Samantha would have been rushing from one exam room to the next in her primary care practice in Philadelphia, swamped with appointments, charts, and calls from patients, hospitals, nursing homes, and pharmacies. Or at least that’s what she would have been doing prior to ten days ago, when the ever-capable, efficient, resilient Dr. Samantha Winters had fallen apart.

“This will give you some breathing room,” her best friend Jane had told her, when she’d first floated the idea over the weekend.

“I thought that’s what I’m getting by taking time off,” Sam said.

“No, you’re wallowing. Sinking into depression. Isolating yourself. When was the last time you wore something besides sweats?”

Sam glanced down at the faded T-shirt and cut-off sweatpants, with the barely legible “Bryn Mawr College” logo. “I’m not depressed,” she said.

“Well, maybe not clinically,” Jane conceded. “But if you don’t do something to shake off this funk, you’re certainly headed that way.”

“Is that your professional opinion, doc?”

“You betcha. So do me a favor, okay? At least check it out. Ross says it’s a cushy position, small town, nice people.”

“If it’s so appealing, why hasn’t someone snapped up the job already?”

Jane’s sigh sounded long and clear despite the spotty wireless connection. “You need me to tell you about the medical malpractice crisis in Pennsylvania? The mass exodus of physicians to neighboring states? The fact that coastal cities are super-saturated while rural America is facing its biggest primary care shortage ever?”

As one of the physicians who’d been lucky enough to nab a plum position straight out of residency in an affluent center-city private practice, Sam didn’t need her nose rubbed in the facts. Nor did she need reminding about the litigious state of American medicine—she’d had enough first-hand experience of that to last a life-time, thank you very much.

Still, six months out in the boondocks?

The closest she’d ever been to rural America was a class trip to Lancaster County in the fifth grade. They’d visited an Amish farmer’s market and gotten to pet some goats. She still remembered the smell of manure and the nauseating sweetness of freshly fried funnel cake.

So what was she doing, parked beside a quaint Victorian on a dead-end street in the middle of rural York County, Pennsylvania? Already the lack of city noise was making her nervous. And she hadn’t passed a single Starbucks on Main Street. How was she supposed to survive without her daily infusion of Skinny Lattes?

She closed her eyes and focused on taking slow, deep breaths. The drive had taken two and a half hours—less time than expected thanks to light traffic, so she had an hour to kill before her scheduled interview. Enough time to stretch her legs and look around. Then she’d find Mona’s Kitchen, the local diner where she was supposed to meet the man doing the hiring.

One meeting, no promises beyond that. If she didn’t like the offer, she was free to hightail it back to her comfortable Rittenhouse Square condo and hole up for another few weeks or months or however long it took her to climb out of this emotional sinkhole.

Grabbing her bag, she got out of the car and approached the pale yellow clapboard. Two steps led up from the main path to the wraparound porch, while a wide ramp with low-set handrails provided easy access from the small parking lot tucked off to the side of the building.

One day of available medical care per week? No wonder they were desperate to hire someone. What did people do the rest of the week if they got sick or injured? Surely there were neighboring towns with physicians who could accommodate the residents of Oakridge? And where was the nearest hospital, anyway?

For a moment she regretted her lack of preparation. She prided herself on always doing due diligence, no matter the situation. This time she simply hadn’t planned on doing anything beyond allaying her friend’s concern. A half day commitment at most, she’d figured. And some pretty scenery to temporarily distract her from the grim thoughts that kept circling in her head like relentless buzzards over a corpse that had been picked clean long ago.

It wasn’t as if she were seriously considering taking a locum tenens position. And certainly not in some backwater town with three stoplights and no decent coffee. She had a perfectly good practice waiting for her back home. Both her partners had assured her they would welcome her back once she’d gotten herself sorted out and was ready to return from her leave of absence.

She followed the porch around the side of the house toward the rear, where another set of steps led to a large expanse of lawn. Glancing up to the second floor, she thought she saw movement behind one of the windows. Was someone there, watching her?

The sound of footsteps and a door slamming somewhere inside had her backing up as her imagination kicked into high gear. Just because it was mid-morning and the place looked like Mayberry didn’t mean it was immune to twenty-first century crime. Drug-seekers were notorious for breaking into clinics, looking for whatever controlled substances they could find.

She dug through her purse for the reassuring outline of her iPhone and turned to beat a rapid retreat to her car—only to slam into a solid wall of male flesh.

Her phone crashed to the floor, and if not for the hard hands that gripped her arms and steadied her, she would have fallen too.

“You okay?” The deep voice seemed to come from high above her.

She blinked, her pulse fluttering erratically and breath coming in shallow puffs.

The man peered down at her, his face blurring a little as he leaned close. She jerked back. The hands tightened and he frowned, dark brows furrowing over pale blue eyes.

He didn’t look like he was strung out on drugs. In fact, the way he was examining her, as if committing her features to memory in case he had to pick her out of a line-up later, you’d think he was having his own suspicions about her.

“Ma’am?” The gravelly tone raised goose bumps across her skin.

“Yes.” She stepped back, both relieved and strangely disappointed when he let go. “I’m fine, thanks.”
He nodded, then bent down to retrieve her cell. She caught a brief glimpse of broad shoulders flexing beneath a white cotton t-shirt and powerful thigh muscles outlined against faded denim before he straightened up.

Well, well, she thought, eying the square jaw faintly shadowed with stubble, the high forehead partly screened by a fall of thick black hair, and those cool eyes that were taking their own unhurried survey of her from head to toe. Maybe small town America did have something to recommend it after all.