You are here: Home / Fiction / Horror / Takaani by Amy Pilkington 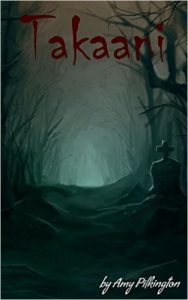 A scream breaks the silence of the midnight hour, and the blood of an innocent child is spilled.

The small Alaskan village of Kashega is terrorized when a beast on a murderous rampage slaughters their sleeping children. The distraught villagers know nothing of the creature, nor how to stop it, and they are desperate for answers.

An injured Eskimo hunter seeks shelter in the town, and his knowledge of the beast is their only chance for survival. The townspeople must somehow stop the slayings and restore peace before it destroys the entire village.

What Inspired You to Write Your Book?
Takaani is my first horror novel. I had attempted horror before, but I was scared by just how dark parts of my mind could be. I finally realized it was a talent and started working on this book. If Stephen King can reveal his dark side, so can I.

How Did You Come up With Your Characters?
I researched to find a creature no one had ever heard of. I wanted something fresh and new. After that, the other characters started popping up in my head. I could picture each one of them as their personalities developed. I actually changed the name of one of my characters near the end of the book in order to use Takaani as the title. It seemed so wrong, but I really wanted to name the book Takaani.

Book Sample
A deafening scream woke Thomas from his sleep. He rushed to little Mary Elizabeth’s room to comfort her. She was prone to bad dreams. He stopped dead in his tracks and collapsed in the floor near her bed. It was empty, and the crisp, white sheets and blankets were now a deep crimson. The still-warm blood made a plop-plop-plop sound as it hit the floor beneath and created a growing pool beside him.

A guttural scream alerted the neighbors that something was amiss. When Edgar Billiot arrived, he found the door of the home had been ripped from its hinges. Deep gouges marred the frame, and a glistening trail of blood streamed across the threshold. A few small drops melted through the snow beneath the home’s eave, but not a speck was seen beyond that point. The falling snow was so heavy that any tracks left behind were covered in an instant. Edgar entered the room and found Thomas in the floor, clinging to the drenched sheets as he cried out for Mary Elizabeth. The child was gone, and the town knew nothing of how it happened. It struck fear in the hearts of all who viewed this grisly scene.