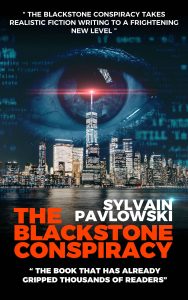 THE BLACKSTONE CONSPIRACY by Sylvain Pavlowski A sickening act of terrorism in the streets of Paris and the assassination of a politician appear at first to be unrelated. Charged with finding out who is behind the attack, the emotionally fragile Commander Pauline Rougier of the Counter Terrorist Brigade discovers that the two incidents may not be so far removed, as a looming civil war threatens to catapult the country into chaos. Meanwhile, troubled yet charming New York Times … END_OF_DOCUMENT_TOKEN_TO_BE_REPLACED