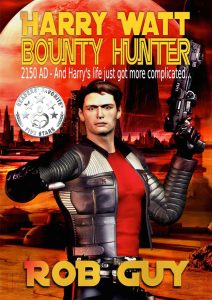 Harry Watt Bounty Hunter by Rob Guy For Harry Watt, Bounty Hunter, simply doing what he's told was never an option. When the best hydrologist on Earth goes AWOL after first helping himself to some company funds, Judge Headlock, Harry’s employer and nemesis, instructs him to bring back the runaway to face justice. A trip to Mars onboard one of the new ships with the StrateLine Drive sounds like fun, but Harry soon discovers something stinks about this job, and it’s not one of his socks. He … END_OF_DOCUMENT_TOKEN_TO_BE_REPLACED