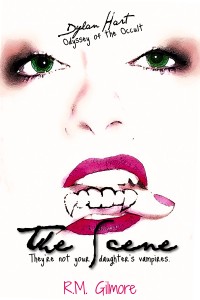 Irreverent, twenty-something journalist, Dylan Hart, is not your average heroine. With a big butt and an even bigger mouth, she has her work cut out for her when she decides to cash-in on the blood-drained bodies of seven prostitutes scattered throughout southern California. In an attempt to write her first bestselling novel and pay off her ever-growing student debt, Dylan begins the search for the culprit of the media-dubbed Vampire Massacres, diving head first into L.A.’s sanguinary … END_OF_DOCUMENT_TOKEN_TO_BE_REPLACED

Alex Stone is a man that is used to getting exactly what he wants. Heir to an advertising dynasty and at the top of his game as lead executive, Alex is confident, commanding and absolutely irresistible. So when his father, CEO of Stone Advertising, hires the curvy Nora Myers to go head-to-head with his son in the boardroom, nothing could prepare Alex for the competitive battle that would ensue, or for the fire in Nora's eyes that would ignite a sexual spark unlike anything he's ever felt … END_OF_DOCUMENT_TOKEN_TO_BE_REPLACED