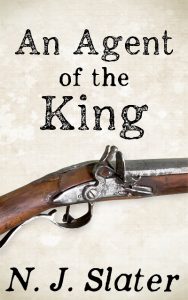 Archibald Dexter, a hedonistic but adventurous and patriotic young man, joined the British Army at the end of the 18th Century. A hero in battle but in constant trouble in barracks, given a final chance for redemption he finds himself on the staff of Admiral Horatio Nelson. Trapped in Egypt following Napoleon’s invasion he will need all his wit and guile to survive and go on to play a pivotal role in Nelson’s victory at the Battle of the Nile. Wounded and thrown into captivity, he eventually … END_OF_DOCUMENT_TOKEN_TO_BE_REPLACED

About N.J. Slater: I have been writing for around 5 years now. I have published fiction set in the 19th Century and more specifically the Napoleonic Wars era. The only reason I have only written the 3 novels to date is simply the old story of the pressure of making a living preventing me from living. What inspires you to write? For years I read the works of Bernard Cornwell, Clive Cussler and Julian Rathbone and then one day I decided, do you know what, you can do that too. So that is what … END_OF_DOCUMENT_TOKEN_TO_BE_REPLACED